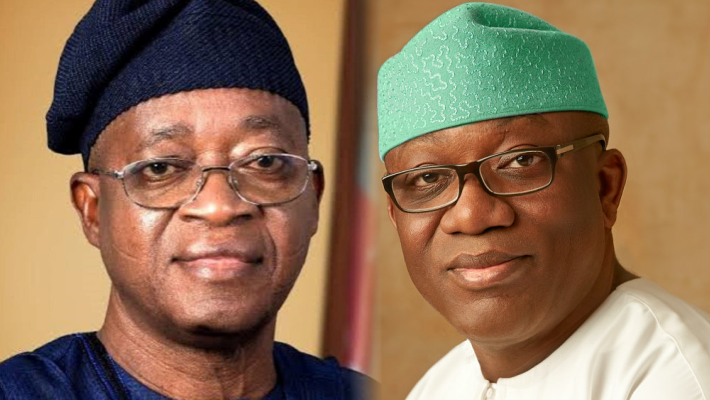 There is no end in sight to the crisis in the troubled Ekiti State chapter of the All Progressives Congress (APC). In Osun State, aggrieved party leaders are trying to reconcile. Correspondent RASAQ IBRAHIM and Toba Adedeji, reports that the on-going membership registration and revalidation ahead of the party’s congress may worsen the internal rife.

Top politician close to Governor Kayode Fayemi hinted that he would not leave anything for chance by ensuring the structures of the party from the ward to the state level are under his firm grip. As a result, Fayemi and his loyalists have been strategising ahead of the looming showdown.

Going by the sequence of events in the party, it is unarguable that the 2022 governorship election, which is less than a year away, is going to be a fight to finish. Fayemi will be on the ballot, but he surely will be interested in who takes over the baton from him. But, the Ojudu-led group, looks battle ready to take their own pound of flesh and frustrate his succession plan, the attempt Fayemi is ready to wad off and resist with every possible means.

A source said a high ranking officer of the party at a meeting mooted the idea of utterly ostracizing Fayemi’s enemies from the APC by preventing them from participating in the ongoing revalidation excercise, but the idea was discarded for being “pedestrian and against common sense” as there are other ways to deal with them.

But, an impeccable source close to the Ojudu-led group told our reporter that the aggrieved leaders have been meeting regularly and strategising for showdown, if eventually they are prevented from the revalidation exercise.

However, the revalidation excersice may be a showdown as party leaders in Ojudu-led group were conspicuously absent from a stakeholders meeting held with the APC membership registration committe-led by Alhaji Yusuf Galambi.

Present at the meeting, where modalities for the conduct of the excersice were discussed, were Fayemi, who was represented by the Deputy Governor, Otunba Bisi Egbeyemi, former Deputy Governor Biodun Aluko, state caretaker chairman, Omotosho, the Chief of Staff to the governor, Biodun Omoleye.

Others include the Deputy Speaker, Ekiti State House of Assembly, Hon. Hakeem Jamiu, Special Adviser to the governor on Political Matters, David Olusoga, leaders and elders of the party across the 16 local government areas and top government functionaries.

The State caretaker Publicity Secretary, Ade Ajayi, said the notice of the meeting was sent all statutory members, including members of Ojudu-led group except those on suspension over sundry issues. But, the Secretary of the group, Femi Adeleye, denied that they were invited.

“I am not invited personally. And as the secretary of the Ekiti APC stakeholders forum, we were not invited as a group. And as a person who is qualified to be in that kind of meeting by the virtue of my former position in the state, I was not invited.”

Adeleye said his group would participate in the revalidation. He said: “We would go there to revalidate and confirm our membership status, but when someone want to use local power, you will see what will happen”, he said.

Ajayi said the membership registration and revalidation exercise would be open to everyone, assuring that no individual or group of persons including members of rival tendencies within the party would be prevented from registering.

He noted that the primary purpose was to enlarge the ruling party’s support base and change the decision-making model to bottom-up approach, where every member would be a player in the administration of the party.

The nationwide membership and revalidation has resurged rivalry between the camps of the Governor Adegboyega Oyetola and his predecessor, Rauf Aregbesola.

It was gathered that part of the resolution that was reached by Oyetola and Minister for Interior, Aregbesola at a meeting held at Chief Adebisi Akande’s residence in Ila-Orangun with National Leader, Asiwaju Bola Tinubu was that the numbers of those who will be in the caretaker committees for govern the local government council areas will be divided into two, with the two camps being represented equally.

Aregbesola while answering questions from reporters claimed that he had no rift with Oyetola. After the statement made by the Minister, there was an uneasy calm as the two camps were quiet on the rift.

The party registration and revalidation and the perceived renege of the agreement of splitting the caretaker committee have widened the gulf between the two camps. While Oyetola was addressing APC supporters in his hometown after he revalidated his membership, he said the exercise should not be about faction, but the genuine love for the party.

Ex-commissioners and aides during the administration of Aregbesola and 13 other chieftains opposed alleged inclusion of a Social Democratic Party (SDP) member in the APC registration committee.

They urged Yobe State Governor, Mai Mala Buni, who is the chairman of National Caretaker Committee, in a petition, to sack one Tayo Adewakun, who they claimed was a relative of Otunba Iyiola Omisore and card-carrying member of Social Democratic Party, from APC registration panel.

Some of the political office holders including senators and members of House of Representatives that Aregbesola determined their candidature before living office in 2018 and people perceived that they are his loyalists are now identifying with Oyetola because it is believed that, he will determine their return ticket to the National Assembly in 2023 because he is a member of national APC caretaker committee that will determine their fate.

Oyetola has been winning more supporters to his side and even bringing back the aggrieved APC members who left the party like former Secretary to the State Government, Moshood Adeoti. He is oiling his relationship with the Senator Iyiola Omisore, 2018 Osun State gubernatorial candidate of Social Democratic Party.

It was gathered that Omisore with thousands of his supporters may officially defect to the APC.

The former Deputy Speaker of the House of Representatives, Lasun Yusuf, is also part of the chieftains that Oyetola is prevailing on, for him to be vibrant in the party.

However, ahead of the National Convention in June, the Osun APC caretaker chairman, Prince Adegboyega Famodun, has been careful on his stand on the revalidation as he does not want to oppose the stands of Chief Adebisi Akande who described the exercise as wasteful and unnecessary; neither did he kick against the National Caretaker Committee because he wanted to return as substantive chairman of the party. He believes that his stands will rather mar or make his ambition.