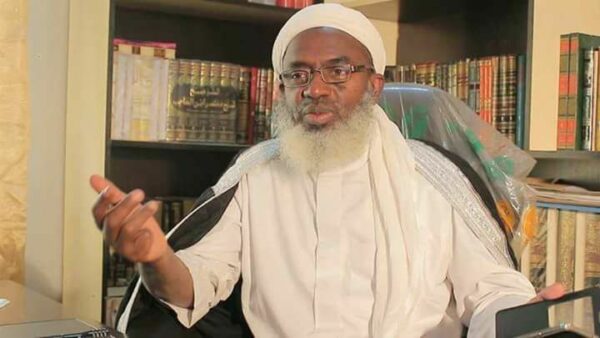 A renowned Islamic scholar, Sheikh Ahmad Gumi, has condemned those agitating for Biafra and Oduduwa Republics.

In an interview with BBC Pidgin on Saturday, the Islamic cleric, who compared the agitators to the Boko Haram terrorists, described them as “miscreants”.

Gumi said those agitating for Biafra and Oduduwa Republics are not different from the Boko Haram sect terrorists in the North.

Gumi also faulted the activities of the agitators who are only pushing their own different ideologies and interests in order to cause chaos in the country.

He said: “I usually give an example of General Murtala Mohammed, the former head of state from Kano that was assassinated by Buka Suka Dimka-led group. He married a Yoruba wife. So, where do you want his children to go if the nation is divided? Are they going to be with the Yorubas or Hausas in the North?

“Look, let’s forget these useless youths. They’re no more different from these herdsmen. These people agitating for Ododuwa, Biafra or Arewa are all the same group of people with Boko Haram.

“Majority of Nigerians want to stay with Nigeria. And if they are in doubt, lets make a referendum. Look at elections for instance, millions of votes from all the states, whether from APC or PDP. This means that Nigerians are ready to stay with a united Nigeria. That is an indirect referendum which shows that the people are ready.

“So, all these youths that are making noise, whether Abubakar Shekau of Boko Haram, Nnamdi Kanu of IPOB and their Ododuwa counterpart, they are just a tiny minority of Nigerians using ethnic, archaic and retrogressive sentiments to destabilise the nation.

“But l can vouch that Nigerians really want to stay together in peace. But in peace and equity. Not any segment of Nigeria is cheated.”

Gumi said the fact that Yoruba and Igbo leaders did not endorse such calls for secession showed they are unpopular opinions championed by few disgruntled persons.

“I’m in Sokoto now, there still many Igbo traders here who don’t want to go back home, so why do you tell me they want Biafra? Biafra is a nuisance just like Boko Haram. You think everyone northerner is a Boko Haram? Most Nigerians don’t want these ethnic or religious groups. They simply want peace and live together as nation. If truly the Yorubas are agitating for Oduduwa, why are their leaders not talking about it? Why Igbo leaders also not talking about Biafra?” he queried.

He said it has become imperative for Yoruba and Igbo leaders to prevent such groups from fanning embers of war in their regions.

“What we expect is for Yoruba leaders and Igbo leaders to take care of their miscreants as we handle herdsmen and Boko Haram which are miscreants in the North. Every leader should take the words to their people. Only the miscreants are fuelling this,” he added.