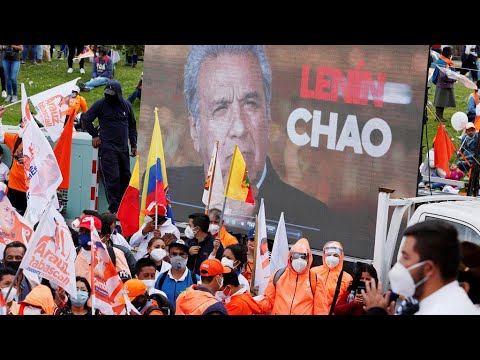 Ecuador will choose a new president Sunday facing unprecedented health measures due to the coronavirus pandemic and the influence of a populist former head of state who was blocked from a place on the ballot due to a corruption conviction.

Sixteen candidates are vying to succeed President Lenín Moreno, a protege-turned-rival of former former President Rafael Correa, who governed Ecuador for a decade and remains a major force despite a criminal conviction that blocked him from seeking the vice presidency this year.

There are so many contenders that an April 11 runoff election is almost certain, but the clear leaders have been a Correa-backed candidate, Andrés Arauz, and a conservative former banker who finished second twice before, Guillermo Lasso.

Voters have been ordered to wear a mask, bring their own bottle of hand sanitizer and pencil, keep a 5-foot (1.5-meter) distance from others and avoid all personal contact in the polling place. The only time voters will be allowed to lower their mask will be during the identification process.

The winner will have to work to pull the oil-producing nation out of a deepening economic crisis that has been exacerbated by the pandemic. The South American country of 17 million people had recorded more than 253,000 cases and nearly 15,000 deaths of COVID-19 as of Friday, according to data from Johns Hopkins University in the United States.

Arauz, a 35-year-old former culture minister who attended the University of Michigan, faces Lasso, who at 65 is making a third run for the presidency after a long career in business, banking and government. Indigenous rights and environmental activist Yaku Pérez has been trailing in third place.

Arauz has proposed making the wealthy pay more taxes and strengthening consumer protection mechanisms, public banking and local credit and savings organizations. He has said he will not comply with agreements with the International Monetary Fund.

Lasso, favors free-market policies and Ecuador’s rapprochement with international organizations. He has promised to create more jobs and attract international banks. He also wants to boost the oil, mining and energy sectors through the participation of private entities to replace state financing.

Hovering over the election is the future of Correa, a leftist who is still only 57. He governed from 2007 to 2017 as an ally of Cuba’s Fidel Castro and Venezuela’s Hugo Chavez, both now deceased.

He remains popular among millions of Ecuadorans after overseeing a period of economic growth driven by an oil boom and loans from China that allowed him to expand social programs, build roads, schools and other projects. But he increasingly cracked down on opponents, the press and businesses during his latter stage in office and feuded with Indigenous groups over development projects His appeal also has been tarnished by a corruption conviction he says was a trumped up product of political vengeance.

Correa was sentenced in absentia in April to eight years in prison for his role in a scheme to extract millions of dollars from businessmen in exchange for infrastructure projects — money allegedly used for political purposes.

That conviction barred him from running as Arauz’s vice presidential candidate.

An earlier attempt by Ecuadoran prosecutors to extradite him from Belgium in an unrelated kidnapping case was rejected by Interpol on human rights grounds.

Moreno won office four years ago with the backing of Correa but broke with him, pursuing business-friendly policies as the nation’s economy was hit by a slide in oil and commodities prices. While eligible to seek reelection, he chose not to run.