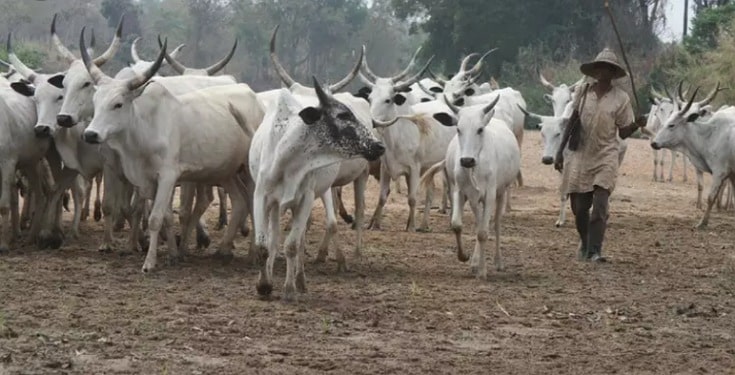 The youths spoke through one of their groups, Talakawa Parliament, at a press conference in Benin, Edo State on Wednesday, ordering herdsmen occupying farmlands and forests in Edo State to quit.

It has been reported that the youth leaders in Edo State have issued a 14-day ultimatum to Fulani herdsmen to vacate their communities.

The ultimatum came owing to the killings and violence perpetrated by suspected killer herders.

The youths spoke through one of their groups, Talakawa Parliament, at a press conference in Benin, Edo State on Wednesday, ordering herdsmen occupying farmlands and forests in Edo State to quit.

The youth leaders, at the conference through the Speaker of the Parliament, Kola Edokpayi, warned that any act of aggression against the indigenes would not be tolerated.

The youths said their order followed the killing of three persons, including two vigilantes by suspected Fulani herdsmen on Monday in Ugo N’iyekorhionmwon, Orhionmwon Local Government Area of the state.

Same Wednesday, some aggrieved women in Uromi had protested the rising cases of attacks, rituals and kidnappings by suspected Fulani herdsmen.

The women had blocked some major roads in the community, alleging that they were constantly being harassed and intimidated by the herdsmen.

They lamented that they had lost fortunes as a result of the destructive activities of cows belonging to the herdsmen, noting that they were no longer safe.

According to them, the solution to the problem is for Fulani herdsmen to leave the area.

Speaking for the Edo youths, the Talakawa Parliament, Edokpayi said they also gave 72 hours to the state Commissioner of Police, Phillip Agbadi, to arrest and prosecute the alleged killers, otherwise the youths would stage a mass protest.

The Speaker said, “We have given the killer herdsmen a 14-day ultimatum to quit farmlands and forests in Edo State. We have not given them notice to leave Edo State so that our mothers and fathers can go to farm.

“We are using this medium to call on the CP to arrest within 72 hours these criminal elements that are responsible for the killing of our people in Ugo N’iyekorhionmwon, Orhionmwon LGA or face a mass protest.

“Our people can no longer travel. We believe in peaceful coexistence. However, nobody should take Edo people for a ride.”

The herdsmen’s menace had recently gained attention in southern Nigeria due to their alleged atrocities in Ondo, Oyo, and Ogun states, and now Edo State.

They have been accused of kidnapping, raping, destroying farms and even murdering in many villages and communities.

The South-West governors two weeks ago banned open grazing, underage grazing and grazing on forest reserves, although it is not yet clear if these laws are being strictly adhered to.