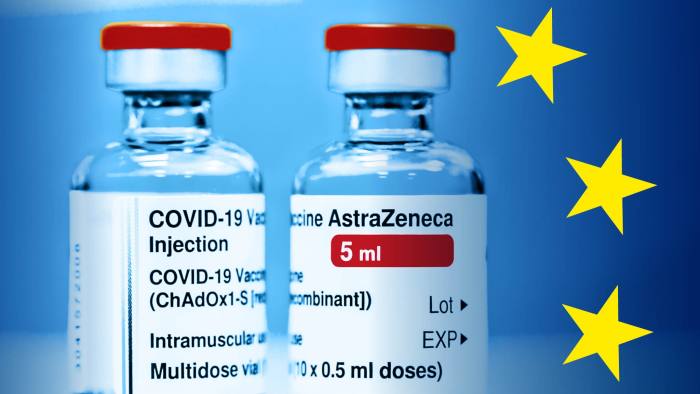 Pharmaceutical giant AstraZeneca has hit back at criticism from the European Union over delays in the delivery of its COVID-19 vaccine to the bloc.

AstraZeneca chief executive Pascal Soriot shot back at EU officials who criticised the laboratory for supplying “considerably fewer doses” than agreed, saying his company “certainly does not take vaccines from Europeans to sell them elsewhere at a profit”.

The French CEO defended the British-Swedish pharmaceutical company an interview given on Tuesday to LENA (Leading European Newspaper Alliance) and published in several European newspapers.

The laboratory, partnered with the University of Oxford, has pledged not to make a profit on the sale of vaccines during the pandemic.

Meanwhile, French firm Sanofi has pledged to help out with vaccine production by boosting distribution of vaccines made by rival producers Pfizer and BioNtech.

Brussels raised its tone on Monday in its stand-off with AstraZeneca, deeming the delays in the delivery of its COVID-19 vaccine “unacceptable”. The European Commission is now demanding “transparency” on exports outside the EU of doses produced in the bloc.

Soriot claims to have had some start-up issues in the UK supply chain as well, but “the UK contract was signed three months before the EU contract. So with the UK, we had three more months to resolve the problems encountered”.

While the EU regulatory green light for this vaccine is expected on Friday, the British laboratory announced last week that deliveries would be lower than expected in the first quarter due to a “drop in production” at a European manufacturing site.

These relate to up to 400 million doses of the AstraZeneca / Oxford vaccine, which has the advantage of being cheaper to produce than its rivals, while being easier to store and transport.

The slowdown in production has alarmed EU countries, already on edge after difficulties in the delivery of the Pfizer-BioNTech vaccine. It increases the pressure on the European Commission, which negotiated the pre-order contracts on behalf of the EU27.

French drug maker Sanofi has stepped into help ease the panic over the lack of COVID-19 vaccinations in the EU. Sanofi will fill and pack vaccines made by rival producers Pfizer and BioNtech from July in an effort to help meet the huge demand.

The company will aim to help supply more than 100 million doses this year from its German plant in Frankfurt, CEO Paul Hudson told Le Figaro newspaper.

The French government has been pressing Sanofi to use its facilities to help make vaccines from its rivals, given high demand and problems with supplies of the few vaccines that are already available.

Last month, Sanofi and Britain’s GlaxoSmithKline said a vaccine they are jointly developing had showed an insufficient immune response in older people, delaying its launch to late this year.

“Europe invested billions to help develop the world’s first COVID-19 vaccines,” she told the World Economic Forum’s virtual event in Switzerland. “And now, the companies must deliver. They must honour their obligations.”

The Commission has raised the possibility of strict export controls on doses made in the bloc in its demands for more information about vaccine production.

“Let me just emphasise the word that is important here is: transparency. This is not about blocking. This is about knowing – what the companies are exporting or will export to markets outside of the European Union,” said Commission spokesman Eric Mamer.

Meanwhile the operation in Germany has drawn criticism from the Governor of Bavaria, Markus Soeder.

“I think that the populations of Europe are extremely stressed and tired by this pandemic which has lasted for a year. Governments are under pressure,” AstraZeneca CEO Pascal Soriot added in his interview, specifying that Europe “which represents 5 per cent of the world’s population, will obtain 17 per cent of our production in February”.

Soriot also affirmed in his interview that the laboratory is working “with the University of Oxford on a vaccine that will target” the South African variant of COVID-19, a virus more transmissible than the first version of the new coronavirus.