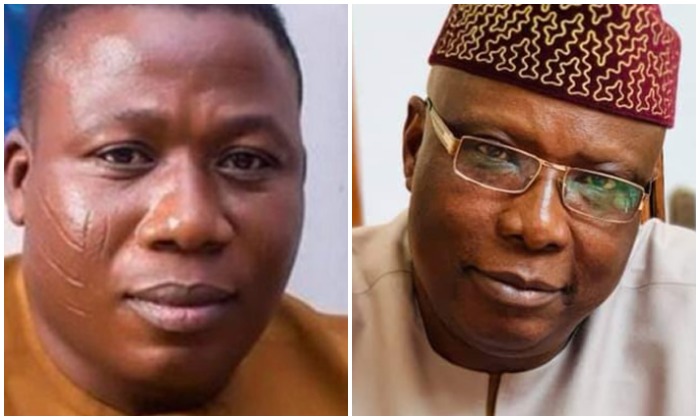 Sunday Adeyemo, a youth leader better known as Sunday Igboho, has described Babafemi Ojudu, a presidential aide, as a liar.

Speaking with journalists at his residence in Ibadan, Oyo state capital, on Tuesday morning, Igboho said he never had any meeting with Ojudu over the 2009 rerun election in Ekiti state.

Ojudu had said he and Bola Tinubu, a national leader of the All Progressives Congress (APC), met with Igboho ahead of the rerun election.

The Presidential aide also said Igboho agreed to meet with them on the condition that Lamidi Adedibu, the strongman of Ibadan politics, who is now late, must not know about the meeting.

But Igboho wondered how Adedibu, who died in 2008, could be an issue in an election which held in 2009.

He also said aside Lam Adesina and Rasheed Ladoja, former Governors of Oyo state, he did not associate with other politicians in the state.
Yoruba activist and warlord, Chief Sunday Adeyemo popularly known as Sunday Ighoho has talked on his losses to the earlier fire incident in his house on Tuesday morning.

He as well challenged Senator Babafemi Ojudu to bring evidence of his claims in his write up where he said he was hired as political thug.

Igboho while responding to questions from Journalist in the morning on the invasion of his house by arsonist said, “I don’t know Ojudu, he is a liar, I was not trained by Baba Adedibu, Senator Ladoja is my boss and i have never betrayed him”.

Senator Ojudu who is a Special Adviser political to Vice President Yemi Osinbajo in his article which went viral on moday claimed that he met with Sunday Igboho in Ibadan and later took him to Tinubu in Akure during the 2009 rerun election in Ekiti where he was engaged to neutralized the operation of the PDP hired thugs .

See also  Insurgency: Every lost soul is precious to God whether Christian or Muslim, says Adeboye

But Sunday while denying the claims said, Senator Ojudu should use his children to swear that such things happened,

“The lies are already in the Ojodu’s statement. He said we met in 2009, and I told him I was sent by Adedibu to destablise Ekiti election, meanwhile Adedibu died in 2008. You see that.

“it is a plot to distract me and give me a bad name, i never collect money from politicians to do this, and it is painful that politicians are conniving with fulani to distract us but I will never be distracted.

From my investigation about him I have found out he had no impact as a Commissioner in Lagos and as a Senator in Ekiti, what are his achievements, how many people did he help, how many projects did he facilitate? It was Fayose that achieved many things in Ekiti , Tell Ojudu to caution himself.