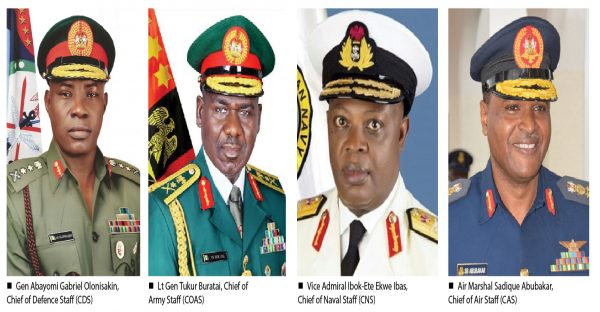 A new retirement package has offered military chiefs in Nigeria juicy rewards when they retire from service.

Details of a new retirement package for senior military officers have shown that Nigeria’s Chief of Army Staff, Lt Gen Tukur Buratai and other military chiefs will smile home with choice cars upon retirement.

According to Sahara Reporters, the new package specified that Buratai and other military chiefs will be awarded four Sport Utility Vehicles, four Peugeot cars, among other juicy retirement benefits.

The report revealed that these juicy offers are contained in the Harmonised Terms and Conditions of Service for Officers, which their administration revised.

SaharaReporters obtained the new HTACOS 2017 which also reveals that the military chiefs will get security staff of over 40 soldiers as well as domestic and foreign medical cover.

The document shows that the brand new SUVs to be given to Buratai; the Chief of Defence Staff, Gen Abayomi Olonisakin; the Chief of Naval Staff, Vice Admiral Ibok-Ete Ibas; and the Chief of Air Staff, Air Marshal Sadique Abubakar, will be replaced every four years at the military’s expense.

President Muhammadu Buhari appointed the defence chiefs on July 13, 2015, and despite the worsening insecurity in the country, Buhari has retained the service chiefs generally perceived by Nigerians to have run out of ideas.

The country has been in the grip of the Boko Haram terrorists in the North-East and banditry in the North-West, with the National Assembly, the Nigeria Governors’ Forum and many notable Nigerians calling for the replacement of the service chiefs.

Meanwhile, the current service chiefs revised the previous 2012 conditions and replaced them with the 2017 HTACOS, which now makes them entitled to the juicy retirement benefits.

According to the HTACOS 2017 obtained by SaharaReporters, Section 11 explains how the military will bear the heavy cost of the many exorbitant retirement benefits lined up for the service chiefs.

The document partly reads, “Retirement benefits for CDS and service chiefs; the following benefits shall be applicable; one bullet-proof SUV or equivalent vehicle to be maintained by the Service and to be replaced every four years. Two; Peugeot 508 or equivalent backup vehicle; three, retention of all military uniform and accoutrement to be worn for appropriate ceremonies.

“Three service drivers; one service orderly; escorts (to be provided by appropriate military units/ formation as the need arises; retention of personal firearms (on his demise the personal firearm(s) shall be retrieved by the relevant Service and also; a free medical cover in Nigeria and abroad.”

From the Harmonised Terms and Conditions of Service for Officers, soldiers, airmen and ratings 2012, the military made provision for only Peugeot cars, and some other benefits, but it did not include the bullet-proof SUVs, the standard guard of nine soldiers and the free medical cover in and outside Nigeria.