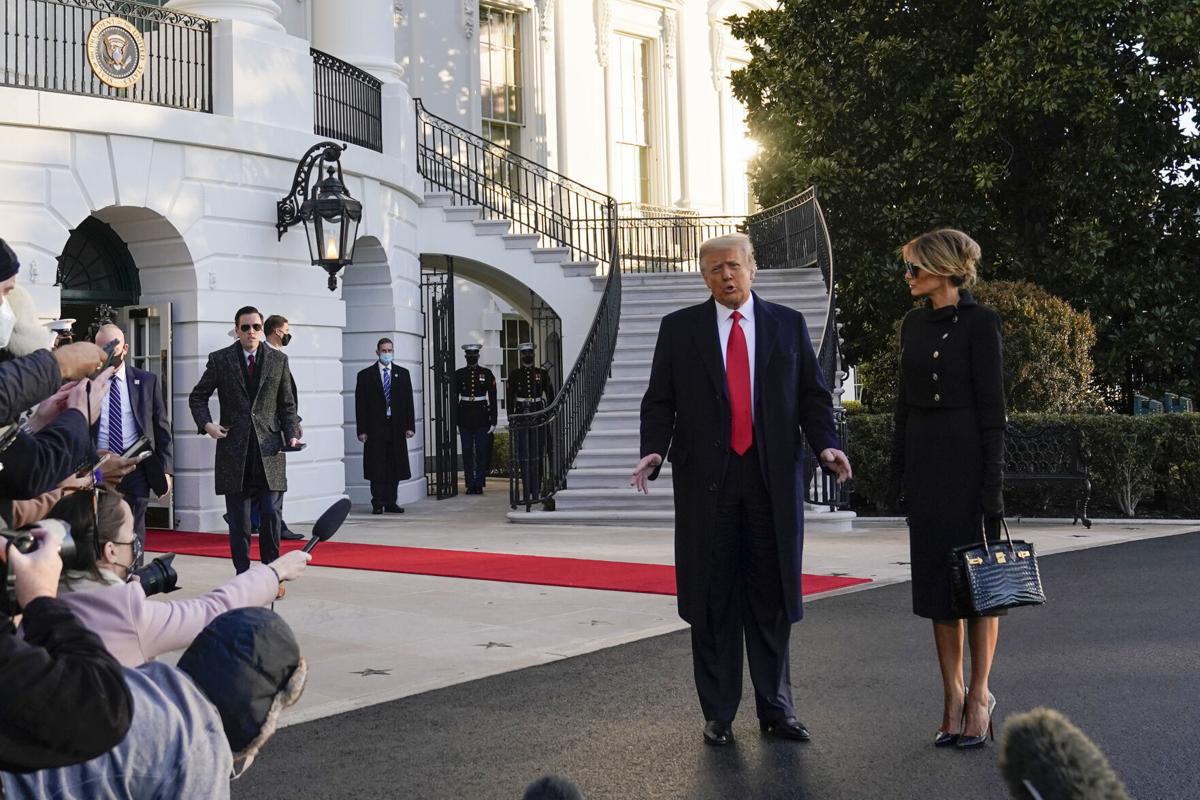 Donald Trump pumped his fist and waved as he departed the White House on Marine One Wednesday for the last time as president, leaving behind a legacy of chaos and tumult and a nation bitterly divided.

Four years after standing on stage at his own inauguration and painting a dire picture of “American carnage,” Trump departed the office twice impeached, with millions more out of work and 400,000 dead from the coronavirus. Republicans under his watch lost the presidency and both chambers of Congress. He will be forever remembered for the final major act of his presidency: inciting an insurrection at the Capitol that left five dead, including a Capitol Police officer, and horrified the nation.

“It’s been a great honor, the honor of a lifetime. The greatest people in the world, the greatest home in the world,” Trump told reporters before heading to Marine One, rotors whirring, on South Lawn.

“We love the American people, and again, it has been something very special. And I just want to say goodbye but hopefully it’s not a long term goodbye. We’ll see each other again.”

Facing crush of crises, Biden will take helm as president

Trump will be the first president in modern history to boycott his successor’s inauguration as he continues to stew about his loss and privately maintains the election that President-elect Joe Biden fairly won was stolen from him. Republican officials in several critical states, members of his own administration and a wide swath of judges, including those appointed by Trump, have rejected those arguments.

Still, Trump has refused to participate in any of the symbolic passing-of-the-torch traditions surrounding the peaceful transition of power, including inviting the Bidens over for a get-to-know-you visit.

Marine One was headed to Joint Base Andrews where Air Force One was parked, a dramatic backdrop against the rising sun. A red carpet has been placed on the tarmac for Trump to walk as he boards the plane. Four U.S. Army cannons were waiting to fire a 21-gun salute to the president.

Hundreds of supporters greeted Trump at Andrews. By the time Biden is sworn in, Trump will already have landed at his private Mar-a-Lago club in Palm Beach, Florida, to face an uncertain future.

Aides had urged Trump to spend his final days in office trying to salvage his legacy by highlighting his administration’s achievements — passing tax cuts, scaling back federal regulations, normalizing relations in the Middle East. But Trump largely refused, taking a single trip to the Texas border and releasing a video in which he pledged to his supporters that “the movement we started is only just beginning.” In his final hours, Trump issued pardons for more than 140 people, including his former strategist, rap performers, ex-members of Congress and other allies of him and his family.

Trump will retire to Florida with a small group of former White House aides as he charts a political future that looks very different now than just two weeks ago.

Before the Capitol riot, Trump had been expected to remain his party’s de facto leader, wielding enormous power as he served as a kingmaker and mulled a 2024 presidential run. But now he appears more powerless than ever — shunned by so many in his party, impeached twice, denied the Twitter bullhorn he had intended to use as his weapon and even facing the prospect that, if he is convicted in his Senate trial, he could be barred from seeking a second term.

For now, Trump remains angry and embarrassed, consumed with rage and grievance. He spent the week after the election sinking deeper and deeper into a world of conspiracy, and those who have spoken with him say he continues to believe he won in November. He continues to lash out at Republicans for perceived disloyalty and has threatened, both publicly and privately, to spend the coming years backing primary challenges against those he feel betrayed him.

Some expect him to eventually turn completely on the Republican Party, perhaps by flirting with a run as a third-party candidate as an act of revenge.

For all the chaos and drama and bending the world to his will, Trump ended his term as he began it: largely alone. The Republican Party he co-opted finally appeared to have had enough after Trump’s supporters violently stormed the Capitol, hunting for lawmakers who refused to go along with Trump’s unconstitutional efforts to overturn the results of a democratic election.

White House cleaning crews worked overnight Wednesday and were still going as the sun rose to get the building cleaned and ready for its new occupants. In what will be the office of incoming press secretary Jen Psaki, a computer keyboard and mouse on her desk were encased in plastic. A black moving truck had backed up to the door of the West Wing entrance, where the presence of a lone Marine guard usually signals that the president is in the Oval Office. Most walls were stripped down to the hooks that once held photographs, and offices were devoid of the clutter and trinkets that gave them life. The face of at least one junior aide was streaked with tears as she left the building one last time.

But although Trump has left the White House, he retains his grip on the Republican base, with the support of millions of loyal voters, along with allies still helming the Republican National Committee and many state party organizations.

The city he leaves will not miss him. Trump rarely left the confines of the White House, except to visit his own hotel. He and his wife never once ate dinner at any other local restaurant; never ventured out to shop in its stores or see the sites. When he did leave, it was almost always to one of his properties: his golf course in Virginia, his golf course in New Jersey, his private club and nearby golf course in Palm Beach, Florida.

The city overwhelmingly supported Biden, with 93% of the vote. Trump received just 5.4% of the vote — or fewer than 18,600 ballots — not enough to fill the Washington Capitals hockey arena.