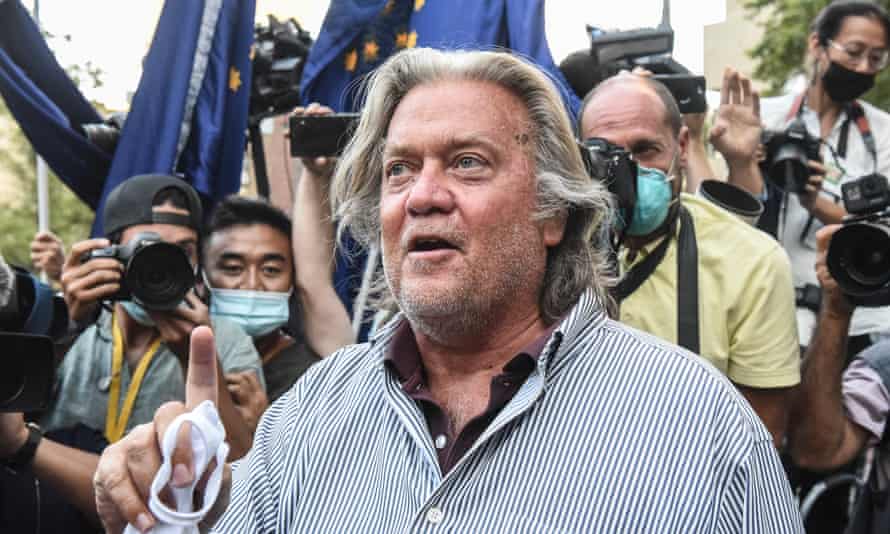 The pardons and commutations for 73 additional people, including Bannon, were announced after midnight Wednesday in the final hours of Trump’s White House term.

“Prosecutors pursued Mr. Bannon with charges related to fraud stemming from his involvement in a political project. Mr. Bannon has been an important leader in the conservative movement and is known for his political acumen,” said a statement published on the official White House website.

The latest clemency list of 73 people did not include members of Trump’s family or his lawyer Rudy Giuliani, who was at the forefront of unsuccessful efforts to get the results of the 2020 presidential election overturned.

Trump leaves office on Wednesday, when Joe Biden is sworn in as the nation’s next president.

Bannon, who was a key adviser in Trump’s 2016 presidential run, was charged last year with swindling Trump supporters over an effort to raise private funds to build the president’s wall on the US-Mexico border. He has pleaded not guilty.

White House officials had advised Trump against pardoning Bannon. The two men have lately rekindled their relationship as Trump sought support for his unproven claims of voter fraud, an official familiar with the situation said.

Bannon, 67, is the latest prominent political ally to receive clemency from Trump, who has often used the powers of the executive branch to reward loyalists and punish his enemies.

As part of more than 140 pardons and commutations in his final days in office, Rappers Lil Wayne and Kodak Black who were prosecuted on federal weapons offenses, were also granted clemency.

Giuliani, who has been at the forefront of Trump’s unsuccessful efforts to overturn the 2020 presidential election, has not been charged with a crime, but investigators have been probing his activities in Ukraine.

Trump was impeached by the Democratic-led House last week on charges of inciting the January 6 storming of the US Capitol by the president’s supporters. He may face a Senate trial and could be barred from running for president again if convicted.

The pardon power, provided for in the US Constitution, is one of the broadest available to a president. While pardons are typically given to people who have been prosecuted, they can also apply to conduct that has not yet resulted in legal proceedings.

A pardon is not reviewable by other branches of government and the president does not have to give a reason for issuing one. But the pardon power is not absolute; it only applies to federal crimes.

Trump previously pardoned his former National Security Adviser Michael Flynn for lying to the FBI about his conversation with the former Russian ambassador, and he commuted the prison term for Roger Stone, who was convicted of lying to Congress during its investigation into Russian interference in the 2016 presidential election.