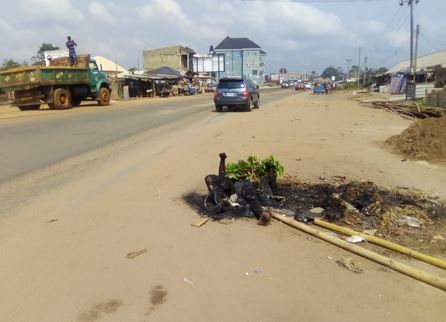 The suspected thief met his waterloo after he attempted to snatch the phone of a female passerby.

A suspected phone thief got more than he bargained for after he was set ablaze by a mob at the Egbeada international market in Imo state over the weekend.

According to reports, the suspected thief attempted to snatch the phone of a female passerby. When she refused, he stabbed her in the process.

Eyewitnesses caught up with him, beat him up, and then set him on fire. His charred body is still lying on the road.