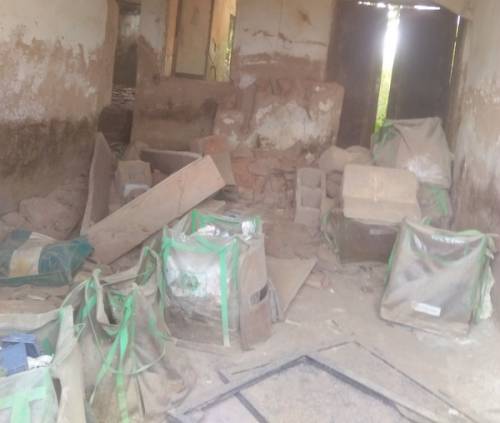 A building belonging to the Independent National Electoral Commission has been abandoned in Kogi state.

The photos were taken at the INEC building in Ibaji Local Government Area of Kogi State.

The abandoned INEC has been overtaken by weeds due to a flood incident.

SaharaReporters learnt that the INEC Onyedega office in Ibaji LGA was used for the election of a former state governor, Ibrahim Idris in 2003 and 2007.

Residents told SaharaReporters during a visit to the creaky, bushy INEC structure that instead of the commission to rebuild the office after the flood, the authorities abandoned it and opted for a rented private building in a neighbouring area – a situation which made the people smell a rat.

Our correspondent observed that election materials and people’s old voter cards were abandoned inside the building and are already rotting away during the visit.

A resident, Johnson Ajogwu, said although the voter cards and election materials might be out of use, it was wrong for INEC to abandon them in the structure and start using a private facility.

“The INEC office was flooded around 2011 and 2012, and that was it. The commission left the LGA headquarters and moved to a private apartment in a neighbouring area. They did not clear the building. They even abandoned election materials and people’s voter cards in the structure.”

SaharaReporters observed that the INEC office windows were removed while the election materials were already soaked with dust. A section of the building might soon collapse.

READ  ”Democracy is the best form of government..” – President Buhari writes as he congratulates Joe Biden

Another commentator, the Ibaji Progressive Youth Foundation President, Apeh Kelvin, said thousands of voter cards were rotting away in the abandoned INEC office.

He added that the commission was wrong to abandon such sensitive materials.

“The INEC office is overgrown and abandoned to rodents. During the December 2020 LGA elections, no electoral officers or ballot boxes were brought to Onyedega, yet a result was announced. Where did they vote? Who were the people who voted?

“This is why we need a functioning INEC office at the LGA headquarters. Our people don’t trust the electoral process because of this nonchalance of the authorities.”