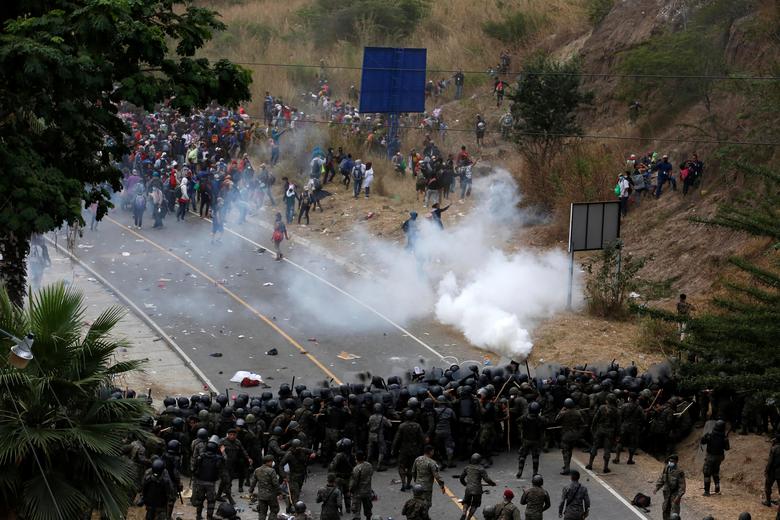 Guatemalan security forces on Sunday used sticks and tear gas to beat back a large migrant caravan bound for the United States, just days before the advent of a new U.S. administration, which urged travelers to abandon the journey.

Between 7,000 and 8,000 migrants, including families with young children, have entered Guatemala since Friday, authorities say, fleeing poverty and violence in a region hammered by the coronavirus pandemic and back-to-back hurricanes in November.

“Guatemala’s message is loud and clear: These types of illegal mass movements (of people) will not be accepted, that’s why we are working together with the neighboring nations to address this as a regional issue,” the Guatemalan president’s office said in emailed comments.

A large section of the caravan clashed early on Sunday with Guatemalan security officials, some 3,000 of whom had mustered by the village of Vado Hondo, about 55 km (34 miles) from the borders of Honduras and El Salvador.

“We want the Guatemalans to let us past,” said Joaquin Ortiz, a Honduran in the caravan. “Because we’re not leaving here. We’re going to carry on. I want to get through because it’s horrible in our country. There’s nothing in Honduras.”

The coronavirus pandemic has battered Honduras’ economy, which last year suffered its worst contraction on record.

The large contingent of Guatemalan security officers managed to stop the migrants from advancing beyond Vado Hondo, with perhaps as many as half of the people in the caravan dispersing into the nearby hills or heading back the way they came, according to a Reuters witness.

Elmer Espinal is traveling with his months-old daughter. He said they were tear gassed by the Guatemalan security forces.

“My daughter almost choked,” said Espinal, a Honduran native. “I want a future for my girls … there’s no work over there in Honduras.”

Authorities sent buses and trucks for migrants who wanted to voluntarily return home.

“They keep trying to pass, but we’re not allowing them to,” said Alejandra Mena, a spokeswoman for Guatemala’s immigration agency.

Even if the migrants do get past, Mexico is preparing to stop them at its southern border with hundreds of security forces, arguing it must contain the spread of the virus.

The Honduran foreign ministry in a statement said it “urges Guatemala to investigate and clarify the actions carried out by Guatemalan security forces and once again, reiterates that only united as a region, work should continue to confront illegal migration.”

The robust response suggests that Democratic President-elect Joe Biden may initially benefit from the hard-line policies of outgoing Republican President Donald Trump, who made cracking down on illegal immigration a priority of his administration.

Video footage shared by the Guatemalan government showed hundreds of migrants, bounded by a hillside, pressing into a wall of security forces, which used sticks to repel the surge. An unspecified number of people were injured, authorities said.

During the chaotic melee, security forces fired off a tear gas canister and used a stun grenade to disperse the crowd, a Reuters photographer said.

Between Friday and Saturday, Guatemala had sent back almost 1,000 migrants entering from Honduras, the Guatemalan government said, as the caravan tried to advance toward Mexico.

On Saturday evening, the Mexican foreign ministry pressed Central American authorities to halt the caravan’s progress, pointing to the need to contain the spread of COVID-19.

Mexico, it said, was committed to orderly and regulated migration and would oppose any form of unauthorized entry.

The first migrant caravan of the year comes less than a week before Biden takes office on Wednesday promising to adopt a more humane approach to migration than Trump.

Still, a Biden transition official, speaking on background, advised people not to make for the United States.

“Overcoming the challenges created by the chaotic and cruel policies of the last four years, and those presented by COVID-19, will take time,” said the official.

“In the meantime, the journey to the United States remains extraordinarily dangerous, and those in the region should not believe anyone peddling the lie that our border will be open to everyone next month,” the official added.

The incoming administration will work to address the root causes of migration, expand lawful pathways and rethink asylum processing, the official said.

Mexican and Central American authorities have coordinated security and public health measures in a bid to deter mass movement of people across the region.