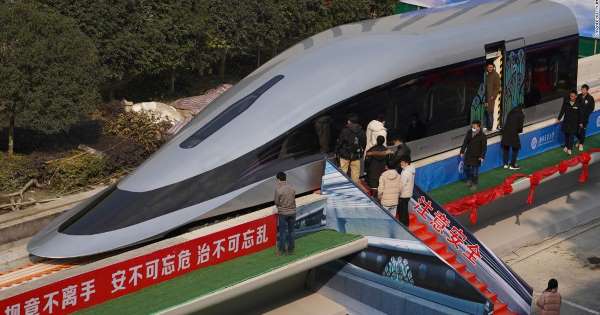 China has revealed a prototype for a new high-speed Maglev train that is capable of reaching speeds of 620 kilometers (385 miles) per hour.

The train runs on high-temperature superconducting (HTS) power that makes it look as if the train is floating along the magnetized tracks.

The sleek 21-meter-long (69 feet) prototype was unveiled to media in the city of Chengdu, Sichuan Province, on January 13. In addition, university researchers constructed 165 meters (541 feet) of track to demonstrate how the train would look and feel in transit, according to state-run Xinhua News.

Professor He Chuan (vice president of Southwest Jiaotong University, which worked on the prototype) told reporters that the train could be “operational” within 3-10 years.

He added: “Sichuan has rich rare earth resources, which is very beneficial to our construction of permanent magnet tracks, thus promoting the faster development of experiments.”

China is home to the world’s largest high-speed rail network, which stretches over 37,000 kilometers, and the fastest commercially operating train — the Shanghai maglev.

The country’s first high-speed Maglev train, it began operating in 2003. Running at a top speed of 431 kph, the train links Shanghai Pudong Airport and Longyang Road in the eastern side of Shanghai.

China has been eager to make further infrastructure improvements ahead of the 2022 Winter Olympics, which will take place in Beijing.

See also  The Story Of Chadwick Boseman, The Brave 'Black Panther' Who Starred In 9 Movies While Hiding Cancer Battle

Earlier this month, the country debuted a bullet train specifically designed to withstand freezing temperatures. The CR400AF-G train can travel up to 350 kilometers per hour in weather as cold as -40 degrees Celsius (-40 degrees Fahrenheit).

It will run on routes between Beijing, Shenyang and Harbin — the latter of which is so cold that it hosts an annual snow and ice festival.