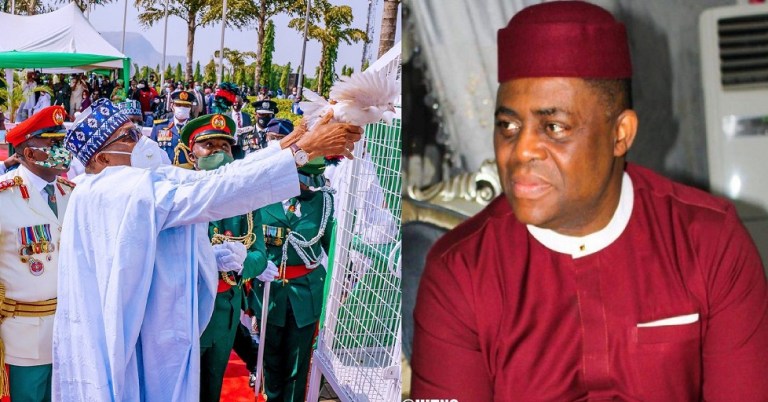 It is customary for the president to releases some white pigeons from a cage and immediately they fly away as a sign of peace.

But the birds refused flying on Friday when they were released with most of them sticking to the cage.

Many Nigerians, who took to social media to comment on the incident, attributed the birds’ behaviour to the absence of peace and unity in the country.

Reacting to the incident via his Twitter handle on Friday, a chieftain of the Peoples Democratic Party (PDP), Fani-Kayode, said the pigeons refused to fly because President Buhari’smadminsitration has failed.

Sharing a video of the incident, Fani-Kayode also described the incident as bad luck and a sign of a bad omen for the President.

He wrote: “When the white doves of peace refuse to fly and when the white pigeons of the Villa fail to leave their cage it is an ominous sign and a bad omen.

“Buhari beware the ides of March.

“Even the pigeons refused to fly! What type of bad luck does this man have?”

Meanwhile, a former Speaker of the House of Representatives, Dimeji Bankole got married to the daughter of Kebbi State Governor, Aisha Shinkafi Saidu on Friday at a private ceremony in Abuja.

After leaving the political scene, Bankole had been relatively quiet and off the radar of public eyes but the wedding was attended by many politicians.

The immediate past House of Reps Speaker, Yakubu Dogara was the Chairman of the day while the First Lady of Ekiti State, Erelu Bisi Fayemi was the chairperson of the day.

The bride, who is a lawyer and graduate of the University of Hull in the UK, is also the granddaughter of a former head of Nigeria’s security organization, Umaru Shinkafi.

Music was in abundance at the wedding ceremony as Timi Dakolo, Joeboy, and Big Brother Naija season 5 winner, Laycon were all on ground to give good and beautiful music.