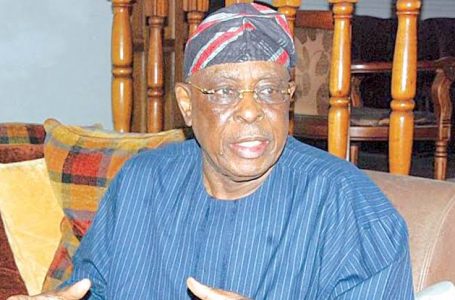 An agreement for a southerner to succeed President Muhammadu Buhari in 2023 was reached by the All Progressives Congress, it has been revealed.

Ahead of the 2023 presidential election, it has been revealed that the ruling All Progressives Congress agreed for a Southerner to succeed President Muhammadu Buhari.

The revelation was made by a former governor of Ogun State, Chief Olusegun Osoba.

He said that an agreement was reached during the All Progressives Congress merger that the presidential candidate of the party for the 2023 presidential election will come from the South.

Speaking when he featured on an Arise Television’s programme, Osoba noted that the agreement was that the North would produce the president in 2015, while the chairman of the party would come from the South.

He said, “We had a clear gentlemanly understanding that the Northern part of the country would produce the president when we did the merger in 2013. And the chairman of the party will then come from the South.

“Of course, at the end of the tenure of President Muhammadu Buhari, the gentlemanly arrangement is that the presidency will come to the south. I talk of the south in terms of the two territories that were forced to amalgamate in 1914 which means the south-south, the south-east and the south-west zones can bid and should be allowed to produce the next president for this country.

“Therefore, those from the South-East, South-South and South-West can put up candidates for the party’s primary and whoever emerges from the primary can then be the candidate of our party. That is the gentlemanly understanding that we reached when we were making the merger arrangement.”

On Monday, a former Kano State Governor and serving Senator, Ibrahim Shekarau, had said that there was no nothing like zoning in the All Progressives Congress’s constitution, ahead of the 2023 Presidential elections in the country.

Shekarau, the lawmaker representing Kano Central, had said that zoning was only considered in the Peoples Democratic Party.

Shekarau had affirmed that retaining power in a particular area does not necessarily make it superior or better.