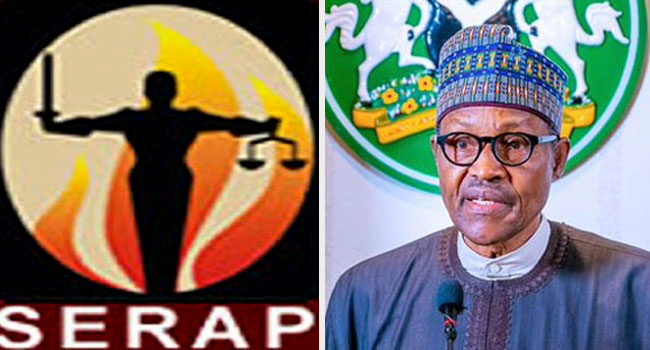 President Muhammadu Buhari has been urged to probe the alleged diversion of ₦3.8bn of public funds meant for the Federal Ministry of Health, National Food Drug Administration and Control (NAFDAC) teaching hospitals and medical centres.

The Socio-Economic Rights and Accountability Project (SERAP) made this known in a statement issued on Sunday by its Deputy Director, Kolawole Oluwadare.

The letter is copied to the Minister of Justice and Attorney General of the Federation, Abubakar Malami, Minister of Health, Dr. Osagie Ehanire, and Chairman of Independent Corrupt Practices and Other Related Offences Commission (ICPC), Professor Bolaji Owasanoye.

SERAP noted that the allegations are documented in Part 1 of the 2018 audited report released last week by the Office of the Auditor-General of the Federation.

The group asked President Buhari to direct Malami to commence an investigation into the alleged stolen funds.

“The organization said the allegations are documented in Part 1 of the 2018 audited report released last week by the Office of the Auditor-General of the Federation.

“The organization is also urging him to promptly investigate the extent and patterns of widespread corruption in the Federal Ministry of Health, teaching hospitals, medical centres, neuro-psychiatric hospitals, National Health Insurance Scheme, and NAFDAC indicted in the audited report, and to clean up an apparently entrenched system of corruption in the health sector.

“In the letter dated 2 January 2021 and signed by SERAP deputy director Kolawole Oluwadare, the organization said Corruption in the health sector can cause serious harm to individuals and society, especially the most vulnerable sectors of the population. These missing funds could have been used to provide access to quality healthcare for Nigerians, and meet the requirements of the National Health Act, especially at a time of the COVID-19 pandemic.

“The Federal Ministry of Health, Abuja spent without approval N13,910,000.00 to organize a 2-day Training and Bilateral discussion with Chief Medical Directors and Chairmen Medical Advisory Council and the Ministry of Budget and National Planning to prepare 2019 Personnel Budget. ₦4,860,000.00 was originally budgeted for the programme.

“The National Food Drug Administration and Control (NAFDAC) paid N48,885,845.00 for services not rendered and goods not supplied. According to the Auditor-General, NAFDAC used fake and fictitious receipts for these payments. NAFDAC also paid N25,734,018.49 to companies/firms who were never awarded any contracts and never executed them.”

“Investigating and prosecuting the allegations of corruption by these institutions would improve the chances of success of your government’s oft-repeated commitment to fight corruption and end the impunity of perpetrators, as well as serve the public interest.

“Any failure to promptly investigate the allegations and prosecute suspected perpetrators, and to recover the missing public funds would breach Nigeria’s anti-corruption legislation, the Nigerian Constitution of 1999 (as amended), the UN Convention against Corruption, and the International Covenant on Economic, Social and Cultural Rights to which Nigeria is a state party.

“Similarly, the Neuro-Psychiatric Hospital Management Board Aro-Abeokuta, Ogun State failed to account for N28,662,265.32, which was to be used to procure drugs, implants, and other inputs, as approved by the Federal Government. The Auditor-General wants the money returned to the treasury.

The National Health Insurance Scheme spent N355,510,475.00 on projects between 2016 and 2017 without appropriation. The Scheme also spent N32,299,700.00 to provide ‘financial medical assistance’ to individuals who have not been enrolled in the scheme (NHIS).

“The Scheme also spent N72,383,000.00 on verification exercise without any supporting documents. The Scheme awarded contracts of N66,798,948.12 to members of staff for procurements, instead of making the procurement through the award of contracts.

“The Federal School of Occupational Therapy, Oshodi, Lagos failed to remit ₦3,250,962.98 of its internally generated revenue for 2018 to the Consolidated Revenue Fund. The School also failed to remit N4,018,252.81 being funds deducted from various contracts. It spent ₦10,507,393.00 without any appropriation or approval.

“The Medical and Dental Council of Nigeria failed to remit N68,604,040.68 of its internally generated revenue to the Consolidated Revenue Fund.

“Allegations of corruption in the health sector undermine public confidence in the sector and obstruct the attainment of commitments made through Sustainable Development Goals, in particular, Goal 16 to create effective and accountable institutions. The allegations also show that Nigeria is failing to fulfil the obligations to use its maximum available resources to progressively realize and achieve basic healthcare services for Nigerians.

“We would be grateful if your government would indicate the measures being taken to address the allegations and to implement the proposed recommendations, within 14 days of the receipt and/or publication of this letter.

“If we have not heard from you by then as to the steps being taken in this direction, the Registered Trustees of SERAP shall take all appropriate legal actions to compel your government to implement these recommendations in the public interest, and to promote transparency and accountability in the health sector.”