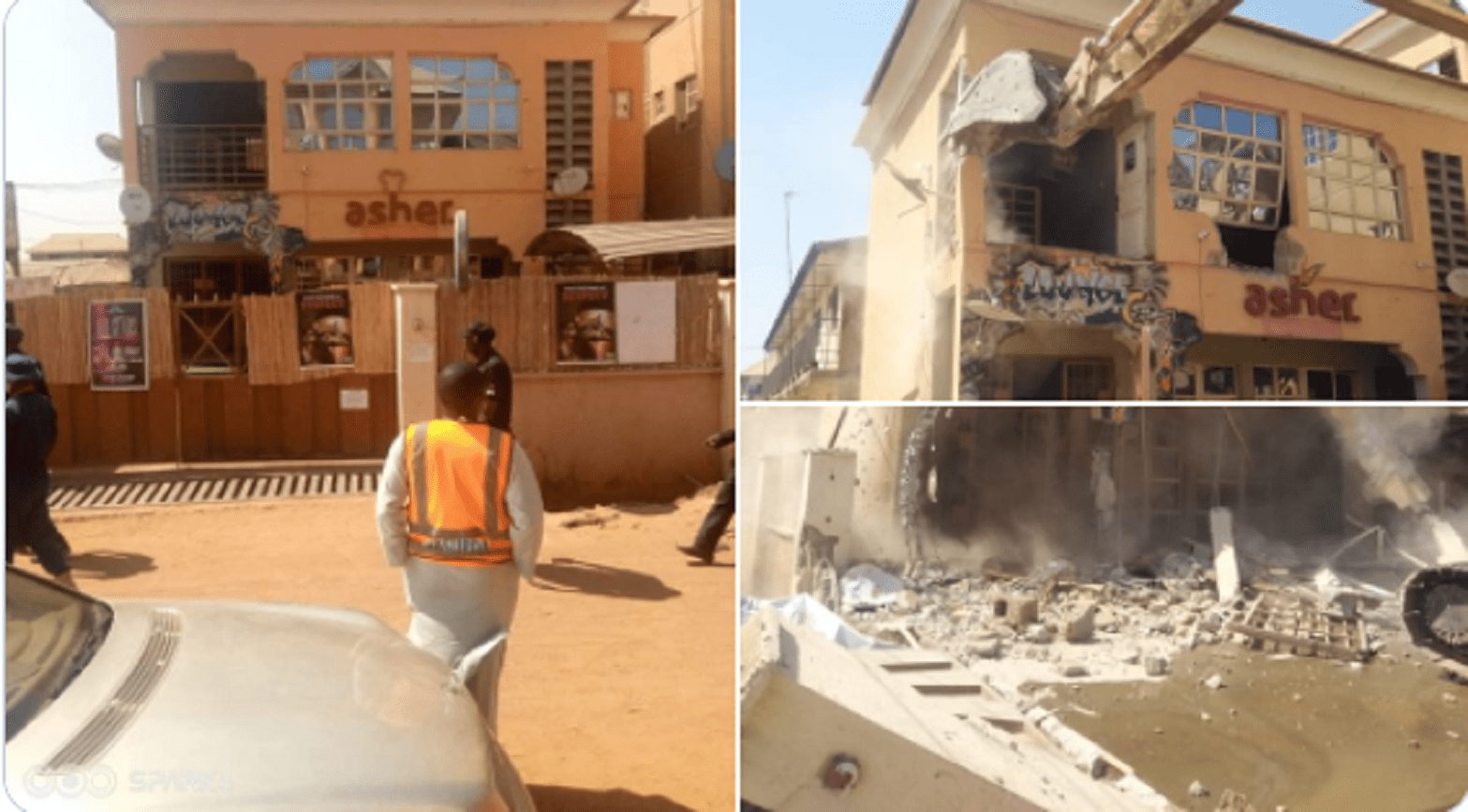 The owner of Asher Kings and Queens Restaurant in Kaduna State, Aisha Mercy Yakubu, has headed to court over the demolition of her establishment.

The Kaduna State Government demolished the restaurant for planning to host a proposed sex party and arrested the organizers of the said event.

But in a statement on Saturday, Yakubu berated the state government for demolishing her restaurant and failing to carry out a proper investigation before carrying out the demolition.

She said on December 27 the VIP lounge was booked for an event where a customer wanted to show appreciation to his own customers for patronising him and not to host an illicit party.

Yakubu said on the day of the demolition of her property no prior notice was given, adding that she lost a month-old pregnancy because of trauma.

Yakubu noted that she plans to seek legal redress for defamation of her character and the loss of her properties in the building.

She said: “Before the event proper commenced, a friend of mine and I noticed an unusual movement around the main gate to the restaurant, as it was half opened to avoid a crowded environment. We approached the main gate and on getting there I saw two truckloads of heavily armed officers of the Nigeria Police Force (NPF).

“I asked the team leader what was going on but he ignored my question and said he will explain to me when we get to the Police Station, Sabon Tasha Division.

”When we arrived at the Police station, my customer, who accompanied me to the station, enquired what the matter was and the police showed us a poster on a GSM phone belonging to one of the officers by name Inspector Felix. It was a poster of an event titled; KADUNA SEX PARTY, which the Police claimed the venue for the supposed ‘sex party’ was scheduled to hold at my restaurant, even though with no address of where it will take place on the poster.

“I denied knowledge of that event as there was nothing of that sort taking place at the restaurant and I wouldn’t stoop so low to entertain such illicit activity at my place, but the police refused to believe me and had my friend and two of my staff detained for one night, one day until the customer that had earlier hired the place for usage on that fateful day was also arrested the next day.”

According to Yakubu, she was released after paying N100,000 for bail to one police officer called Felix.

She said: “I noticed how incompetent the NPF were, I suggested to them to call the number on the supposed ‘Kaduna Sex Party’ poster, which they immediately put a call through and a name came out using the True Caller App as MARVELLOUS AKPAN.

“The Police asked me to pay a fee of N20,000 for them to do their job of tracking the user of the phone number, which I immediately paid them so that they will swing into action.

“Marvellous Akpan was arrested the next. He was interrogated and he obliged to owning the phone number on the poster and printing of the poster which was posted on Social Media, assisted by a friend of his named Noah and one other guy.

“On further interrogation, Mr. Marvellous Akpan confessed to the Police that he doesn’t know me and has never been to my restaurant nor have any knowledge of its address.

“Mr Chimeze, who had hired the place was released, summarily, after the successful arrest of Mr Akpan.”