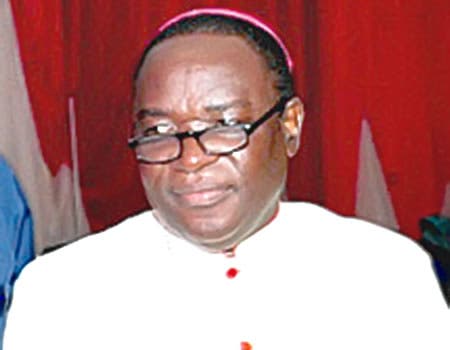 He also faulted the Nigerian leader for failing to solve the insecurity situation in the country. The clergyman opined that all that Buhari has done would have led to a coup had it been he was not from the north.

Kukah had said: “President Buhari deliberately sacrificed the dreams of those who voted for him to what seemed like a programme to stratify and institutionalise northern hegemony. He has pursued this self-defeating and alienating policy at the expense of greater national cohesion.

Reacting to Kukah’s statement, the presidency had accused the Bishop of stylishly calling for a violent ouster of the President Buhari administration.

In a statement on Monday obatined by Naija News, CAN stated that the Presidency, the leadership of MURIC and other individuals and groups are twisting “the crux of the homily Bishop Kukah gave at Christmas”.

The Christian group described MURIC’s claim that Kukah referred to Islam as a violent religion as baseless.

According to CAN, the leader of MURIC, Prof. Ishaq Akintola, was often careless with his assertions and many times acting as if it was a political platform instead of a religious one.

“CAN 19 northern states and Abuja, therefore, condemned in its entirety the misleading and inciting statements of MURIC and its likes calling on the international, as well as the local community to particularly counsel Prof Akintola of MURIC to learn to walk the path of honour and not be a merchant of crisis,” it said.

CAN insisted that it was “unable to find any expression suggesting an affront to Islam or a call for a coup,” adding that sadly, “MURIC aims to incite citizens against one another along the lines of faith instead of denouncing the insecurity witnessed across the country which is the point Bishop Kukah’s message.”

“From the east to the south, west and all over the north, travelling has become a nightmare while hapless people are dragged from their homes for ransom.”

It noted that their memory “is fresh with the gruesome killings of 76 farmers in Borno State in early December 2020 whose crime was simply being farmers irking for a source of livelihoods for their families.”

CAN pointed out that the Kankara boys’ kidnap, with the excruciating pains the kids, their parents and school were thrown in, nothing was read from MURIC and their likes, stressing that “now from the blues as Bishop Kukah talked the truth to power, there are unscrupulous statements aimed at painting black a message that was clear and concise alerting the government of its failure on the security of lives and property of Nigerians.”