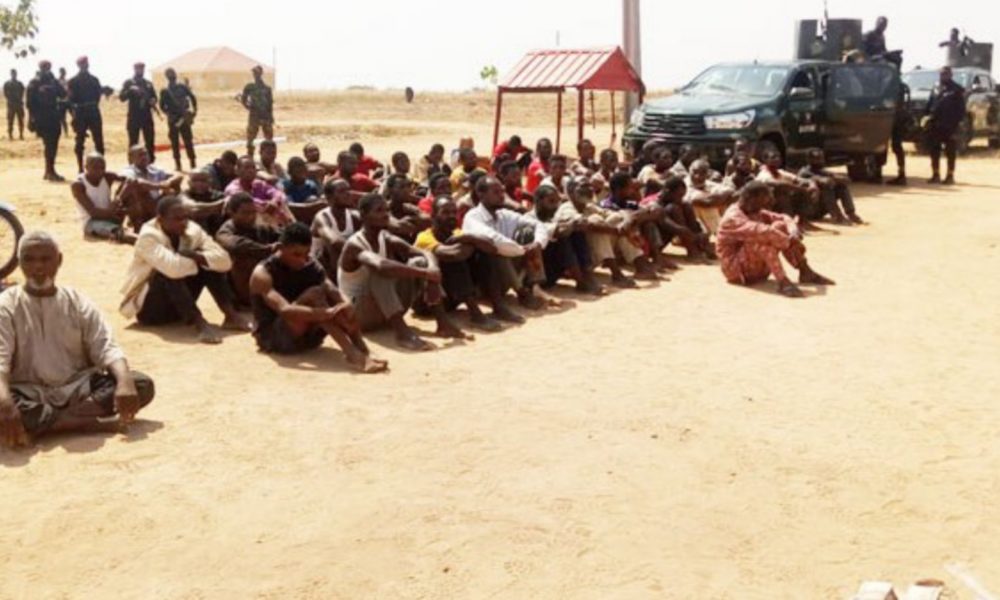 The commander of the Nigerian Army Four Special Forces Command, Major General Moundhey Gadzama Ali on Wednesday revealed that several bandits and criminals have been arrested by troops during recent operations.
The top army commander made the revelation when he paraded sixty-six (66) suspected bandits and criminals at the command’s headquarters at Doma Local Government Area of Nasarawa State on Wednesday.

Ali disclosed that the suspects were arrested by his men during operations in the North West, North East, and North Central, South-South, South-West regions of the country based on credible information which they acted upon.

Among those paraded on Wednesday were 41 persons alleged to be gang members of the late Benue militia leader, Terwase alias Gana, which also included his Chief Priest, Ugba Iorlumun.

“We have operated in Borno, Yobe, Benue, Nasarawa, Kogi, Niger amongst other places. In Benue, we have arrested the Chief Priest of the late Criminal Terwase alias Gana, one of his men called ‘ Commander’s among others and razed the Shrine. While another criminal, Paul Duguma died in Katsina-Ala,” he said.

“In Niger State, Special Forces with 31 Artillery and the Nigerian Airforce, we neutralized kidnappers, destroyed the dens of Alhaji Damina, while the kidnappers killed each other due to rivalry between the camps of Alhaji Kawuwajo and Zagalo in Kamfanin Wayo, a boundary Village between Niger and Kaduna State.”

However, the Commander regrettably made known that seven special forces personnel of the Nigerian Army were killed during Operation Nut Cracker II in Kamfanin Bobi, Mariga Local Government Area of Niger State where nine bandits were killed.

He however submitted that the troops remain committed to protecting the people and citizens of Nigeria, urging law-abiding members of the public to go about their activities and report suspected cases to security agents.

“I want to assure you that we will continue to do our best to ensure the safety of all law-abiding citizens of this great nation.

“I urge all law-abiding citizens not to be intimidated by these criminals in providing actionable intelligence that will help the command to rid these troubled areas of bandits, terrorists, and their collaborators,” he said.

Meanwhile, the Inspector-General of Police (IGP) Mohammed Adamu, says there won’t be a repeat of the abduction of 333 students of the Government Science Secondary School, Kankara, Katsina State.

Recall that bandits had abducted and released over 300 students of the school after the intervention of members of the Miyetti Allah and repentant bandits.

Speaking after a meeting at the Katsina State Police Command on Wednesday, IGP Adamu vowed not to allow a repeat of the incident.

Also at the meeting with the IGP was the Special Adviser to the Governor of Katsina State on Security, Ibrahim Katsina, the chairman of the state branch of Miyetti Allah Cattle Breeders Association (MACBAN) Alhaji Manir Atiku, and other stakeholders.

Adamu stated that the meeting was convened to strategize on how to stop bandits or criminals from operating in the state at any time of the day and night.