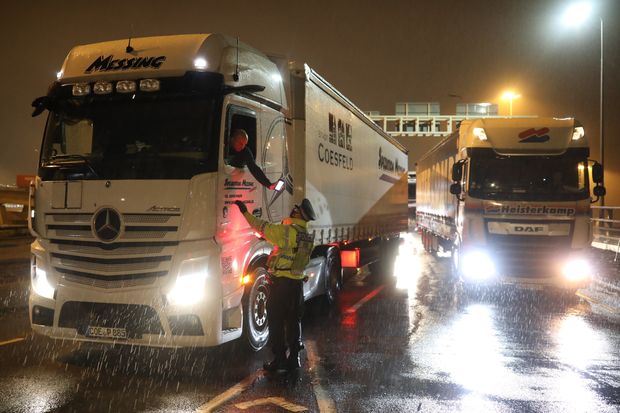 Tensions have spilt over in the English port of Dover as stranded truck drivers and travellers face further delays in leaving the country.

They have been left in limbo for days after France closed its border to the UK amid the emergence of a new COVID-19 variant.

A deal was struck to reopen the border on Wednesday, but only to those with a negative COVID-19 test.

Some have complained there is not enough capacity at the port to get people tested.

Soldiers and the UK’s official test-and-trace workers were being deployed to carry out the tests.

UK government minister Robert Jenrick said it could “take a few days” to get the truck drivers – which number several thousand – tested.

Jenrick urged other truckers not to Dover until the backlog has been cleared.

There has been some movement out of the port this morning, however. Associated Press reporters saw a ferry from Britain pulling into the French port of Calais before dawn, and trains carrying freight and car passengers were allowed to cross into France again.

France was among dozens of countries to close their borders to the UK due to the spread of a more infectious COVID-19 variant.

Paris announced on Tuesday evening it would ease its ban, allowing rail, air and sea services from the UK to resume this morning.

Only French nationals, residents in France and those with a “legitimate reason” to travel will be allowed into the country, and passengers need to present a negative result on a COVID-19 test that they took less than 72 hours before departure.

Results from both PCR and rapid antigen tests will be accepted, provided that the test used can detect the new variant of the coronavirus found across the Channel.

The two countries’ leaders held talks on Monday and agreed to resolve the issue of goods transportation, which has been held up at the Channel as a consequence of the blockade.

On Tuesday, the European Commission called on EU countries to lift full travel bans on the UK, following the decision by many countries to close borders over the new variant.

Brussels issued a statement calling for EU member states to allow for essential travel of UK and EU citizens.

“Blanket travel bans should not prevent thousands of EU and UK citizens from returning to their homes,” said Justice Commissioner Didier Reynders.

The Commission said it accepted that countries must take precautions to control the spread of the new virus variant, but called for coordinated exemptions for “citizens and residents returning home and other essential travellers”.

Speaking to Euronews, Health Commissioner Stella Kyriakides said: “What is important is that any measures taken need to be harmonised and coordinated across the member states. We have seen throughout this pandemic that harmonisation and coordination makes us much stronger and more effective in tackling the pandemic.”

Deliveries to countries further afield such as Canada and Turkey are also affected, the company said.

Restrictions on UK travel across Europe

Most countries in western Europe and beyond have now suspended transport links with Britain.

Spain and Portugal decided on Monday to suspend flights from the United Kingdom from Tuesday. Spanish citizens and residents will still be able to enter the country, as long as they have a negative COVID test result.

Switzerland has banned entry for people coming from the UK and is requiring anyone who entered the country from there from December 14 to undergo a 10-day quarantine.

Russia has also suspended air links with the UK for a week, with restrictions starting at midnight on 22 December, the government said in a statement.

Germany has suspended all its air links with Great Britain until January 6.

The Dutch ban, from Sunday until January 1, came hours after Britain issued stricter restrictions for part of the country to slow the new variant.

“An infectious mutation of the COVID-19 virus is circulating in the United Kingdom. It is said to spread more easily and faster and is more difficult to detect,” the Dutch health ministry said in a statement.

The Dutch public health agency, therefore “recommends that any introduction of this virus strain from the United Kingdom be limited as much as possible by limiting and/or controlling passenger movements.”

In early December, sampling of a case on Dutch territory had “revealed a virus with the variant described in the United Kingdom,” the Dutch government has said.

Italy banned flights from the UK from Sunday until January 6, as the country detected a case of the new strain in a hospital in Rome.

The patient had recently flown back from the UK, a statement from the health ministry said.

“I have signed a new decree that blocks flights from Great Britain and prohibits entry into Italy for people who have stayed there for the last 14 days,” Health Minister Roberto Speranza said in a statement.

Ireland imposed a 48-hour ban on flights from the UK, starting at midnight on Sunday. Irish transport secretary Eamon Ryan said ferries will continue to operate to allow freight to be shipped between the two countries.

“We need haulage coming in to keep our shelves full but other passengers will be restricted,” he said.

Austria, Sweden,Romania, Finland, Denmark and Bulgaria are among other countries to have also imposed travel restrictions.

Denmark said flights to and from the UK would be suspended for 48 hours from Monday. Finland has put in place a two-week suspension of flights, also from Monday.

Canada announced its own ban on Sunday night. Prime minister Justin Trudeau said in a statement that for 72 hours starting at midnight on Sunday, “all flights from the UK will be prohibited from entering Canada”.

He added that travellers who arrived on Sunday would be subject to secondary screening and other health measures. A follow-up statement from the government said cargo flights were not included in the ban.

Morocco and Turkey also temporarily suspended flights to the UK on Sunday.

On Monday, Russia and India banned flights from the UK.

The Central American nation of El Salvador, meanwhile, said it would refuse entry to anyone who has visited Britain in the preceding 30 days.

Saudi Arabia has suspended international flights and closed its borders for a week.

What’s different about the new variant?

The variant spreading across the UK is up to 70 per cent more transmissible than other types, Johnson has said.

But he stressed “there’s no evidence to suggest it is more lethal or causes more severe illness,” or that vaccines will be less effective against it.

On Sunday, British Health Secretary Matt Hancock added to the alarm when he said: “The new variant is out of control.”

The new variant currently accounts for over 62 per cent of COVID infections in London and was the cause of a further lockdown across the south-east of England.

But in his briefing to TV stations on Sunday, Germany’s health minister Jens Spahn said EU experts have concluded that current vaccines against COVID-19 remain effective against the new variant.

“As far as we know at the moment and following talks between experts from the European authorities,” the new strain “has no impact on the vaccines”, which remain “just as effective”, he said.