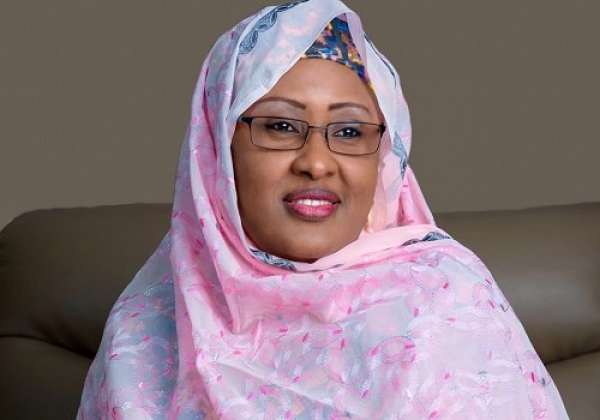 First Lady Aisha Buhari, has been away from the Presidential Villa, Aso Rock Abuja for the past two months.

The president’s wife quietly left the country for Dubai, the United Arab Emirates (UAE) on a medical check-up, according to one of her aides, Kabiru Dodo.

He spoke in Jalingo, Taraba state at the weekend, dismissing reports she left the Villa for fear of insecurity.

It was gathered that she left shortly after the wedding of one of her daughters, Hanan.

Aisha Buhari’s absence became obvious due to her inactiveness on the social media.

Besides, different aides have been representing her to distribute relief materials to the needy in various states across the country under the aegis of the Aisha Buhari Foundation.

Dodo, who spoke on the latest development while presenting some items to widows on behalf of the president’s wife, faulted the report that the first lady left the country because of rising insecurity.

According to Dodo, “The first lady travelled for her medical trip, she did not flee the country because of insecurity.

“What people are saying is baseless and worth nothing to be considered. I want to tell the whole world that I do speak to her daily and she is ready to return to the country as soon as she is done with the medical treatment abroad.”

On August 22, Aisha thanked all Nigerians for their prayers and well wishes while she was away for medical treatment in the United Arabs Emirates (UAE).

Hajiya Aisha had created a similar concern in 2019 when she stayed out of the country for over two months after leaving the Kingdom of Saudi Arabia where she had performed pilgrimage for London, the United Kingdom (UK).