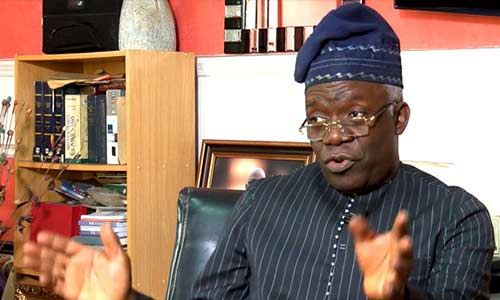 The interim Chairman, Alliance on Surviving COVID-19 and Beyond, Mr Femi Falana (SAN), says over 70 corpses of persons killed in Lagos during the #EndSARS protests have yet to be claimed.

Falana said this during an interview on Sunday.

The Chief Coroner of Lagos State, Mojisola Dada, had in a public announcement on November 19, 2020, called on relatives of people who lost their lives between October 19 and 27 to visit the Lagos State Teaching Hospital to identify and claim bodies of their loved ones.

However, Falana said so far, only about 20 families had come forward to claim bodies.

The ASCAB chairman added that many people did not know that their relatives had been killed, while some others might have left the “matter to God.”

He said, “About 98 dead bodies were dumped in various mortuaries out of which three were dumped there on October 20. However, less than 20 relatives have shown up at the mortuaries to identify their loved ones and take them for burial.

“Investigations by ASCARB show that people are quietly mourning their dead and some are afraid. Others haven’t confirmed that they lost anybody. So far, less than 20 relatives have come to identify their loved ones. This is over a month after the announcement

“Some didn’t know their loved ones were there. Some have accepted their fate as an act of God.”

Falana explained that this was not the first time that people would fail to show up to claim corpses of relatives.

He said this was similar to the case of the killing of members of the Islamic Movement of Nigeria in Zaria, Kaduna State in 2015 by the Nigerian Army, when only 15 relatives out of the 347 buried in mass graves came forward.

The ASCARB chairman said similarly, most of the relatives of the 938 persons killed in the riots that ensued after the announcement of the 2011 presidential election result also did not show up.

“The Ahmed Lemu presidential panel determined that 943 persons were killed in 11 states in the post-election violence, but very few relatives showed up. So, these sorts of things are not new,” said Falana.