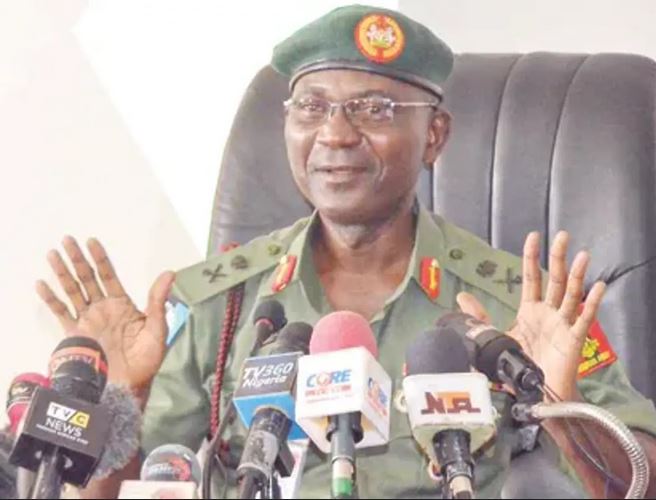 The Nigerian military on Saturday made some disclosures on how it carried out the rescue operation of the 344 boys kidnapped from their school in Kankara, Katsina State, on December 11.

The military disclosed that while kinetic and non-kinetic approaches were used to ensure that all the boys were rescued unhurt, there was resistance from the abductors who laid an ambush for the troops.

The News Agency of Nigeria identified Jibrin as the Special Technical Adviser to the Minister of Defence, Maj. Gen. Bashir Magashi (retd.).

Jibrin said following the abduction of the boys, the minister led a delegation, including the Service Chiefs and the National Security Adviser, to Katsina and Kankara.

He said the minister gave the rules of engagement, directing the troops to ensure that the abducted boys were rescued without casualties and within the shortest time possible.

He said, “Following the directive, the troops closed in on the abductors from four different fronts, including the reinforcement that was made from other divisions, to ensure that the entire location was sealed off.

“The bandits were all under siege and they were fully aware of that, feeling the impacts of the presence of the troops both from the air and on the ground.

“When they approached the location where the boys were held, the troops encountered some pockets of opposition which they cleared and moved deeper into the forest.

“Although there was no casualty on the part of the boys, a lot of the bandits were neutralised because in the attempt by the military to move forward, they laid ambush in two places along the way.

“In fact, in the second place where they laid ambush, there was serious resistance because they were hiding and had occupied the road.

“They delayed the movement of the troops for some hours before they were neutralised.”

Jibrin said while the troops were on the field, negotiations were ongoing at another level of the rescue efforts.

He said the troops could not completely demobilise the bandits because of possible collateral damage as the abducted boys were used as human shields.

On the claim by the Boko Haram terrorists that they were responsible for the abduction, Jibrin said the group was only seeking cheap relevance.

“(Abubakar) Shekau does not have the reach to carry out the abduction because a lot is being done to stop them in the North-East.

“He is just taking advantage of what happened to get publicity locally and internationally; it is clear that the abduction was done by bandits.

“All their efforts when they were trying to reach out to the bandits, which they did, were monitored,’’ he said.

On his part, Enenche said the rescue mission, like any other one, was a delicate operation because if it was not carried out very professionally, the tide could turn negatively.

“This is an operation where you do not rely on your capacity on platforms and mechanical weapons but your ability to effectively carry out the mission with unarmed combat.

“This means you have to silence your enemies and take your objective away without firing a shot.

“It is very delicate in the sense that if you do not manage the operation well, the children who are in-between you and the enemies will now become the victims.

“When they become the victims, the people outside there will attribute it to failure on the part of your security forces,’’ he said.

The 344 pupils of Government Science Secondary School, Kankara, Katsina State, who were rescued from bandits on Thursday have been reunited with their families.

While some of them were reunited with their families and even left for their individual homes on Friday, the rest left Katsina with their various families on Saturday morning.

It was learnt that shortly after the President, Major General Muhammadu Buhari (retd.), met the freed students on Friday evening, a medical team was drafted to the Hajj camp along Daura Road where the pupils were lodged and carried out a medical examination on them.

Scores of parents were also at the Hajj camp where they were pleading to be reunited with their children and allowed to have custody of them.

Pupils who were certified fit on Friday were reunited with their families and they were allowed to depart Katsina that evening.

The remaining pupils were handed over to their respective families on Saturday morning after they were also certified medically fit.

He said, “Yes, all the students have rejoined their families after they were certified to be medically fit. Some left on Friday while some left on Saturday morning.’’

One of the freed pupils, Farouq Aminu, and his father, Mallam Aminu Dayyabu, also confirmed the development.

“My father and I left Katsina on Friday evening and we arrived home (Bakori) around 10 at night. I thank the government for our rescue,” the pupil said.

Meanwhile, the ruling All Progressives Congress has tendered an apology to the pupils for the trauma they were subjected to during their six days in captivity.

This was contained in a statement titled, ‘APC welcomes release, commends security agents and demands pre-emptive measures against reoccurrence,” which was signed by the Chairman, Caretaker/ Extraordinary National Convention Planning Committee of the party, Mai Mala Buni, in Abuja, on Saturday.

“The party apologises to the pupils and vows that President Buhari and the party will do all it takes to make sure that they continue to study in a safe environment,” Buni said.

The APC said it had no doubt in the ability of the nation’s security agencies to deliver on their mandates once they were well motivated.

Also, the National Leader, All Progressives Congress, Asiwaju Bola Tinubu, congratulated Buhari on the rescue of the Kankara schoolboys.

Tinubu, in a statement on Saturday by his media aide, Tunde Rahman, stressed the need for upgrading the country’s security infrastructure, saying there could be no development in a climate of fear and insecurity.

The former Lagos governor also commended Governor Aminu Masari of Katsina State and the armed forces for working tirelessly to secure the release of the schoolboys.

“The quick release of the schoolboys from their abductors has vindicated the President in his untiring efforts to rid the country of insecurity and see the back of bandits and insurgents in the land,” Tinubu said.

Similarly, Nobel laureate, Prof. Wole Soyinka, has expressed gratitude over the release of the abducted schoolboys.

The celebrated writer, who spoke during the public presentation of Dr Nike Okundaye’s biography written by Kofo Adeleke, on Victoria Island, Lagos, decried how schoolchildren’s kidnapping seem to have become a new cultural enterprise in Nigeria.

Soyinka said, “So, let me say how delighted I am to be here today, some of the icing on the cake of the last few days, which have been very traumatic for us, Nigerians, and for humanity in general, you know the kidnapping of schoolchildren which seems to become a Nigerian culture as a new cultural enterprise in Nigeria but I suppose as they say, all is well that ends well, it ended well so far; we await the next blue in-between.

“So, thank you for giving us this occasion, for timing this occasion so that it becomes a bigger celebration than even what we are witnessing around us.”

The President of the National Association of Nigerian Students, Sunday Asefon, on Saturday met Governor Aminu Masari and some of the freed pupils in Katsina.

Asefon disclosed in a statement he issued in Katsina on Saturday that he left for Katsina by road when he learnt of the pupils’ abduction with the intention to remain in the state until their abductors release them.

He, however, said he was happy to learn of their release shortly before he reached Katsina.

He enjoined the pupils not to be distracted by their treatment in the hands of the abductors, urging them to, instead, focus on their education.

The National Chairman of the Peoples Democratic Party, Uche Secondus, called on Buhari to resign as President over rising insecurity in the country.

Secondus made the call in a statement titled, “Resign now, Secondus charges Buhari after admitting failure on security,” signed on his behalf by his Media Adviser, Ike Abonyi, in Abuja, on Saturday.

Secondus said, “As the buck stops on the table of the Commander-in-Chief, the President should accept his failure and stop looking for excuses.

“I find it extremely unacceptable that after the President disregarded all wise counsel to rejig the nation’s security architecture for effectiveness, he is now turning round to admit their failure and blame operatives whom he kept even in their apparent inefficiency.”

He said having admitted failure, the honourable thing for Buhari to do was resign from office.