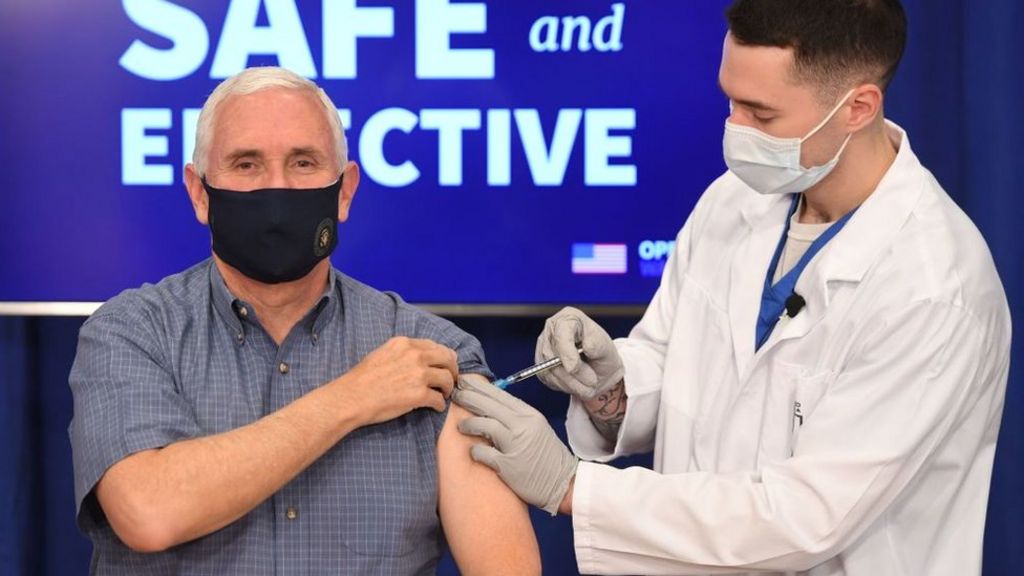 US Vice President Mike Pence received his Covid-19 vaccine live on television on Friday, seeking to shore up public support for vaccinations as US regulators were on the cusp of approving a second vaccine for emergency use. President-elect Joe Biden will be vaccinated on Monday.

Pence said he “didn’t feel a thing” after he, his wife Karen Pence and Surgeon General Jerome Adams each rolled up their sleeves and took injections from white-coated medical staff, becoming the highest-profile recipients to receive the vaccine publicly.

After US deaths from the coronavirus topped 3,000 for a third straight day, Pence called the vaccinations a sign of hope, with 20 million doses expected to be distributed nationwide before the end of December and hundreds of millions more going out in the first half of 2021.

US hospitalizations have set records on each of the past 20 days, approaching 114,000 on Thursday, according to a Reuters tally.

The situation was especially dire in California, with more than 50,000 new cases each of the past two days and many hospitals reporting their intensive care units are at or near capacity. That has triggered a renewal of sweeping stay-at-home orders across much of the state.

“We expect to have more dead bodies than we have spaces for them,” Los Angeles Mayor Eric Garcetti told a briefing on Thursday.

The Pences and Adams were injected with the vaccine developed by Pfizer Inc and German partner BioNTech SE , which was approved last week. A second vaccine, from Moderna Inc, was expected to win regulatory approval from the Food and Drug Administration on Friday, Pence said.

Those vaccines require two doses, given three or four weeks apart, while others under development may require only a single dose. All have been developed with unprecedented speed in less than a year, thanks to technological advances and the urgency of the global pandemic.

Beyond the logistical challenge of the most ambitious vaccination campaign in decades, health officials must convince a skeptical public they are safe and effective. A recent Reuters/Ipsos poll found only 61% of Americans were open to getting vaccinated.

Pence and Adams being vaccinated publicly “is symbolic to tell the rest of the country the time is now to step to the plate, and when your time comes, to get vaccinated”, said Dr. Anthony Fauci, director of the National Institute of Allergy and Infectious Disease.

Frontline healthcare workers, first responders and nursing home residents have been given priority, but a parade of high-profile jabs could soon follow. Fauci, who still sees patients, has said he might receive the vaccine within days.

While departing President Donald Trump has yet to embrace messages about social distancing and mask-wearing, he has encouraged people to get vaccinated and championed his administration’s Operation Warp Speed program to promote the development and distribution of vaccines.

But Trump, who survived a bout with Covid-19 a few weeks before losing the November 3 election to Biden, has yet to announce his plans for getting a shot.