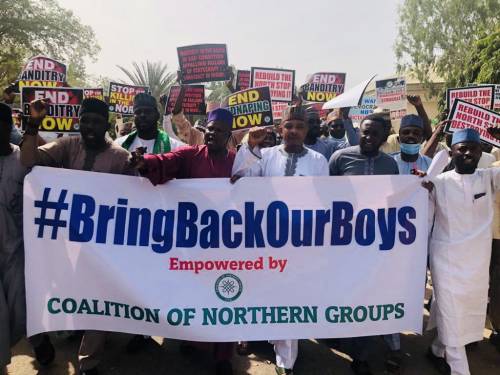 The protesters stormed the streets and also chanted songs seeking the rescue of the abducted students.

The Coalition of Northern Groups (CNG) has begun to protest the abduction of schoolboys in Katsina state.

The groups on Thursday embarked on a protest in Katsina State to force the government to rescue hundreds of students kidnapped from Government Science Secondary School, Kankara in the state.

Led by some national leaders of the group, the protesters bore placards with inscriptions as “BringBackOurBoys;” “government must speak out;” and “We want our children back”.

The protesters also chanted songs seeking the rescue of the abducted students.

Speaking to journalist, a leader of the group, “We are here today because we want to tell the Federal Government that what they are doing is not enough and Mr President has failed us. Mr President has shown no sympathy over this matter.