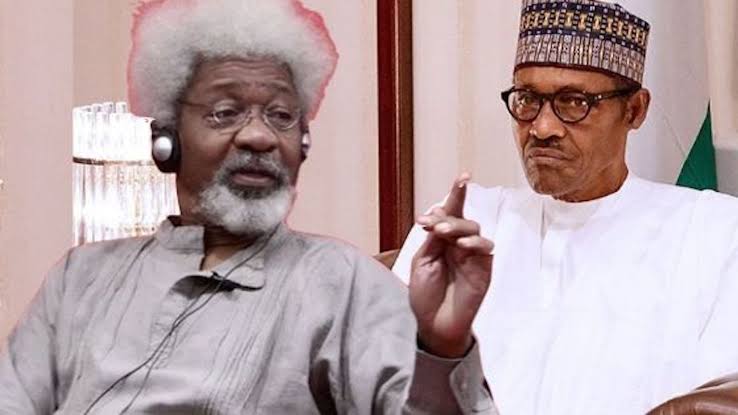 Nobel Laureate, Professor Wole Soyinka has described the abduction of secondary school students in Kankara, Katsina State as a slap on President Muhammadu Buhari in his home terrain.
Soyinka in a statement on Monday where he reacted to the incident said the abduction is another confirmation that President Buhari is not in charge.

It will be recalled that hours after President Buhari arrived Daura, his home town for a 7-days private visit, gunmen stormed Government Science Secondary School in Kankara LGA, Katsina State, northwest Nigeria, and kidnapped dozens of students from their dormitories.

The development has attracted several reactions from local and international quarters and Soyinka in his own reaction condemned the entire saga, describing it as a slap on all Nigerians.

He further called on the government to rescue the students and overhaul the nation’s security architecture to prevent a repeat of such happenings.

Soyinka as reported by Daily Trust in the statement titled: “INFRADIG – A Presidential Comeuppance,” said, “It is merely the latest in the serial stinging slaps across the face of the nation, and it draws blood from every sensing citizen. Over five years since Chibok, we have yet to anticipate, and to guard against a repeat. We continue to hand over innocent wards cheaply, en masse, to the agents of darkness and despair.

“A government refuses to accept that, as indicated several times over, the nation is at war. At war within itself, and that it requires drastic measures, away from spasmodic responses after the dread deed, if there is any will left over to salvage what is left of nationhood.

“What is tragically demonstrated daily in all departments of citizen survival is the need to overhaul the nation’s structural existence – beginning, obviously, with the imperative of guaranteeing that very existence.”

Soyinka added that the fact that the attack occurred in Buhari’s state at a time the President himself was in the state shows the criminals are sending out a challenge.

He also reiterated his stance that Buhari is not in charge.

In his words, “He did not consider it infradig at the beginning.. He responded to the polite invitation to rub minds urgently over a people’s security anxieties as one who still struggled to preserve the tattered remains of his ‘Born-Again’ democratic camouflage.

“However, his reversal of consent raised yet again the frightening situation report I have fervently posed: Buhari is not in charge. Whoever is, that segment of the cabalistic control obviously cornered him on the way to the lawmakers’ chambers and urged : Don’t! Their invitation is infradig! He succumbed.

“Beneath the dignity of a Commander-in-Chief! Well. The opportunistic homicidal respondents – Bandits/Boko Haram or whoever – thereupon picked up the gauntlet and provided a response in their own language: abduction once again of the nation’s children. They handed him a slap across the face, on his home terrain, taunting: See if that is more suited to your dignity.”

Meanwhile, Katsina State Governor, Aminu Masari has revealed the government is in talks with bandits that abducted at least 333 students of Government Science Secondary School, Kankara.

Masari made this known on Monday when he briefed President Muhammadu Buhari in Daura.

While briefing the president, the Kastina State Governor assured Buhari of progress in rescuing the students unharmed.