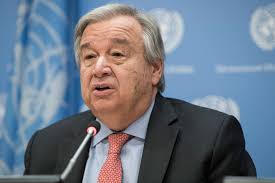 Speaking at the opening of a virtual summit on Saturday marking five years since the Paris climate deal was signed, UN chief Antonio Guterres called on governments to declare a “state of climate emergency”.

UN chief Antonio Guterres called on governments Saturday to declare a “state of climate emergency” and make good on their promises to slash carbon pollution as they recover from the pandemic.

Speaking at the opening of the Climate Ambition summit, held online to mark five years since the Paris climate deal, Guterres warned that nations’ current commitments were “far from enough” to limit temperature rises to 1.5C degrees Celsius.

“If we don’t change course, we may be headed for a catastrophic temperature rise of more than 3.0 degrees this century,” he said.

“That is why today, I call on all leaders worldwide to declare a State of Climate Emergency in their countries until carbon neutrality is reached,” he added.

More than 75 heads of state are expected to announce renewed emissions cutting targets or signal great intent to help the most vulnerable nations deal with increasingly frequent climate disasters.

The Paris deal enjoined nations to limit warming to “well below” 2C (3.6 Farenheit) through sweeping cuts to greenhouse gas emissions.

But progress has stalled even in the face of growing public anger over the state of the planet and a string of scientific reports warning of the dangers of inaction.

The UN says emissions must fall 7.6 percent annually through 2030 to keep the 1.5C temperature cap in play.

In 2020, as the pandemic brought lockdowns and restrictions on movement, emissions fell a record seven percent, the UN said this week.

Yet Guterres said governments were missing the chance to green their economic recoveries.

He said G20 nations — responsible for the lion’s share of carbon pollution — were spending 50 percent more in their rescue packages on sectors linked to fossil fuels than to low-carbon energy.

“This is unacceptable. We cannot use these resources to lock in policies that burden future generations with a mountain of debt on a broken planet,” he said via video-link.

Guterres urged countries that had already announced net-zero targets to make good on their promises and to accelerate emissions cuts in line with the science.

“Every country, city, financial institution and company needs to adopt plans to reach net zero emissions by 2050 — and start executing them now, including by providing clear short-term targets,” he added.