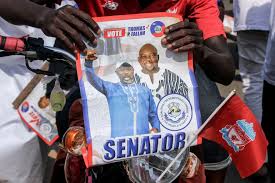 Liberians are voting on Tuesday on President George Weah’s plan to shorten presidential terms, with critics fearing he could use the change to cling to power.

Former football star Weah has told supporters keeping the same leader for years “is not the way to go” and wants presidents and lower-house politicians to serve five years instead of six; and senators seven years instead of nine.

But reducing term limits is a relative novelty for the region, where ageing presidents have used constitutional changes to hold on to power.

In Guinea, 82-year-old President Alpha Conde won a controversial third term in October after pushing through a new constitution that allowed him to bypass a two-term limit.

Opposition politicians in Liberia fear Weah, 54, could try a similar move, although his office has denied the claim. He was elected in 2018 and is still serving his first term in office.

Alongside the vote on reducing terms, Liberians are also choosing whether to repeal a 1973 ban on dual nationality, a move which some hope could be an economic boon in the poor nation of 4.8 million people.
The country is still recovering after back-to-back civil wars from 1989 to 2003 and West Africa’s 2014-16 Ebola crisis.

Hundreds of thousands of Liberians are thought to live overseas, having fled war and poverty.

If they adopt another nationality they are barred from owning property at home, however, among other restrictions.

“I got here at 5:30am to vote, yes for the dual citizenship,” said Manuela Jackson, a 23-year-old university student whose brother has US citizenship, who was voting in the capital, Monrovia.

Should voters opt to lift the dual-nationality ban, Liberians with two passports will still be barred from holding elected office.

The referendum is taking place alongside a mid-term senatorial election. About 2.5 million voters are registered, according to the national elections commission.

Polls are set to close at 6pm (18:00 GMT), with initial results expected this week.