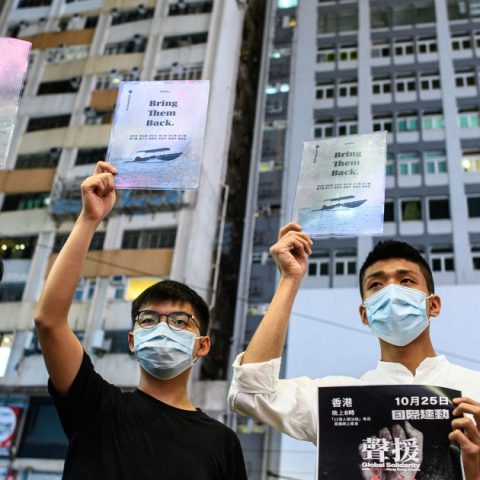 The police did not identify the people, saying only that they were aged between 24 and 64. Local media said former pro-democracy legislators and veteran activist Leung Kwok-hung, known as Long Hair, was among them, while a post on the Twitter account of former legislator Eddie Chu said he too had been arrested.

The arrests come a day after eight people aged between 16 and 34 were detained over a protest they held on a university campus last month. Three of them were picked up on suspicion of violating the national security law, sweeping legislation that was imposed by Beijing on June 30.

“This seems to be part of an unrelenting crackdown on opposition voices here in Hong Kong,” Al Jazeera’s Divya Gopalan said, noting that the July 1 demonstration has been held every year in the territory since the 1997 handover.

China has argued the security legislation, which punishes what Beijing broadly defines as secession, subversion, terrorism and collusion with foreign forces with up to life in prison, was crucial to restoring stability after mass protests last year that evolved into calls for greater democracy.

Opposition politicians and Western governments fear the law is being used to suppress dissent and erode the wide-ranging freedoms guaranteed to Hong Kong when it was returned to Chinese rule in 1997 after more than a century as a British colony.

Last week three pro-democracy activists including Joshua Wong were jailed for taking part in a protest last year, while media tycoon Jimmy Lai was denied bail over a charge of using his office for purposes other than stated on the lease. The 71-year-old has already been arrested under the National Security Law and accused of “colluding with foreign forces”.

On Monday, the United States announced further sanctions on Chinese officials over the law. It has already imposed sanctions on officials including Chief Executive Carrie Lam who complained it had made it difficult for her to use her credit card.