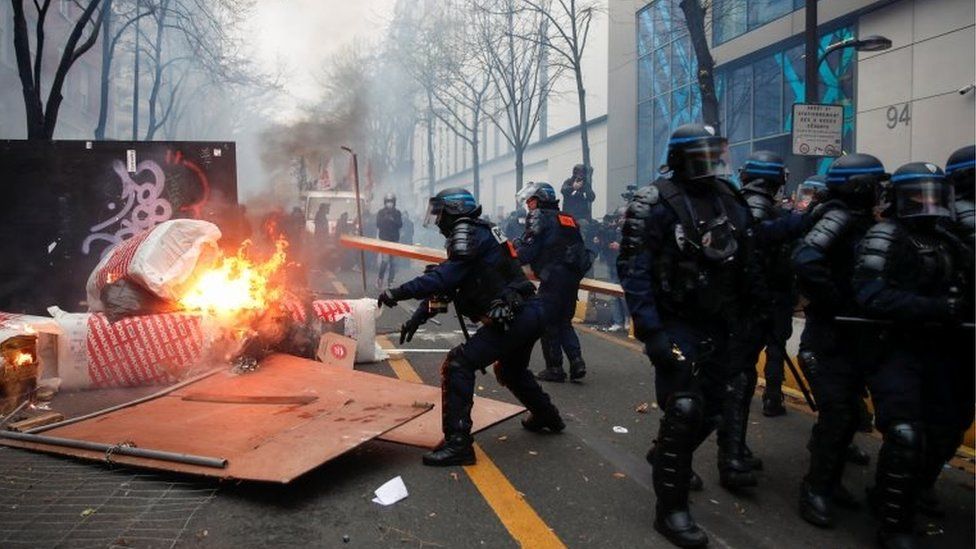 Dozens of protesters have clashed with police in the French capital Paris in fresh demonstrations against a controversial draft security law.

Nearly 100 rallies were planned nationwide on Saturday over the draft bill that would outlaw taking photos of police with malevolent intent.

Macron ‘shame’ at police beating of black man
Responding to the backlash, President Emmanuel Macron’s ruling party said last week that parts of the law would be rewritten. However, this has not done enough to assuage its opponents.

On Friday Mr Macron acknowledged “there are police who are violent” and said “they need to be punished”, in a live interview with Brut, a youth-focused news portal site.

What happened on Saturday?

Thousands of people, including members of the anti-government Yellow Vest movement, had been marching peacefully in the capital when pockets of protesters, dressed in black and with their faces covered, started launching projectiles at riot police, Reuters reports.

The windows of a supermarket, property agency and bank were smashed, according to the AFP news agency, and police responded to the violence by firing tear gas.

Some of the demonstrators set up impromptu barricades in the street which they set on fire, it added.

Paris police, quoted by BFM TV, said some 500 rioters had infiltrated the protest. Interior Minister Gerald Darmanin said 22 people had been detained over the incidents.

Police had been heavily deployed to the capital in a bid to avoid a repeat of the violent clashes seen there last weekend over the same law, which left dozens wounded.

Peaceful protests were staged elsewhere across France, including Marseille, Lyon and Rennes.

In his interview with Brut on Friday, President Macron lashed out at earlier violence in Paris, which he blamed on “crazy people”.

He said an online national platform would be launched for people to flag up unnecessary police checks, and that police would be wearing body cameras more widely from June 2021.

Why are people angry about the bill?

Article 24 of the proposed bill makes it a criminal offence to publish images of on-duty police officers with the intent to harm their “physical or psychological integrity”.

Advocates say the article will protect police from harassment and targeting on social media.

But critics say media freedom and citizens’ right to film police action must not be impeded, as the French police are now under intense scrutiny for alleged racism.

Images of music producer Michel Zecler being kicked and punched at his Paris studio last month by three white policemen shocked the nation, and further enraged opponents to the bill.

Since then, four officers have been placed under criminal investigation and members of President Macron’s ruling party have pledged to “completely” rewrite part of the new law.

“We know that doubts persist about it…while we can never tolerate any reduction of press freedom or images,” said Christophe Castaner, who heads Mr Macron’s group of centrist MPs in parliament.