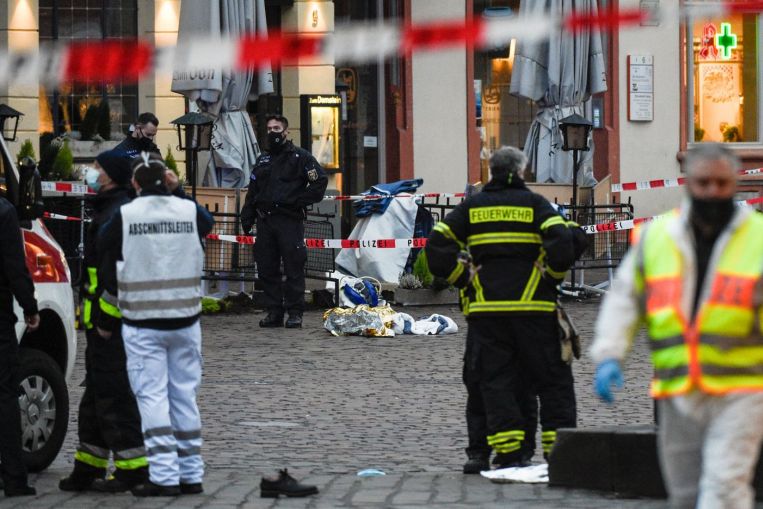 Five people are now confirmed by police to have died in western Germany after a car was driven through a pedestrianised area in the city of Trier.

Police updated the earlier tally of four deaths, revealing in a tweet on Tuesday evening that a fifth person had been killed.

A middle-aged man is in custody and police do not suspect a political, religious or terrorist motive.

One of the victims was a nine-month-old baby, the dpa agency reported. Two women aged 25 and 73, and a 45-year-old man, were also killed.

The baby’s mother is understood to be among 15 people with serious injuries in hospital after the car, an off-road vehicle, was driven for 900 metres through the pedestrianised zone.

A 51-year-old local man was arrested at the scene and his car seized. Prosecutor Peter Fritzen told an early evening news conference that he suffered from psychiatric problems which may have played a part in his act.

He was not previously known to police, Trier deputy police chief Franz-Dieter Anker said earlier, adding that there did not appear to be a “political or religious motive”. The suspect has not been named.”

Anker described how the vehicle, an SUV, “struck and crushed passers-by at random”.

Prosecutors have launched an investigation on multiple counts of suspected murder, attempted murder and dangerous bodily harm. They added the suspect had been driving under the influence of alcohol.

“The news out of Trier makes me very sad,” said Chancellor Angela Merkel in a statement posted by her spokesman on Twitter. “My condolences go to the relatives of the victims, who have had their lives torn from them in such a sudden and violent manner.”

The vehicle collided with passers-by as it travelled into the main Simeonstraße market area at around 1.45pm on Tuesday.

Police said there is no indication of an ongoing threat and urged people to avoid sharing images of the scene on social media.

The area was still cordoned off on Tuesday evening as people began to arrive to lay candles in tribute.

Trier city council said a memorial event would be held to commemorate the victims outside the Porta Nigra, the city’s Roman gate, at 10 am on Wednesday.

Locals were advised to avoid the city centre as a police investigation continued.