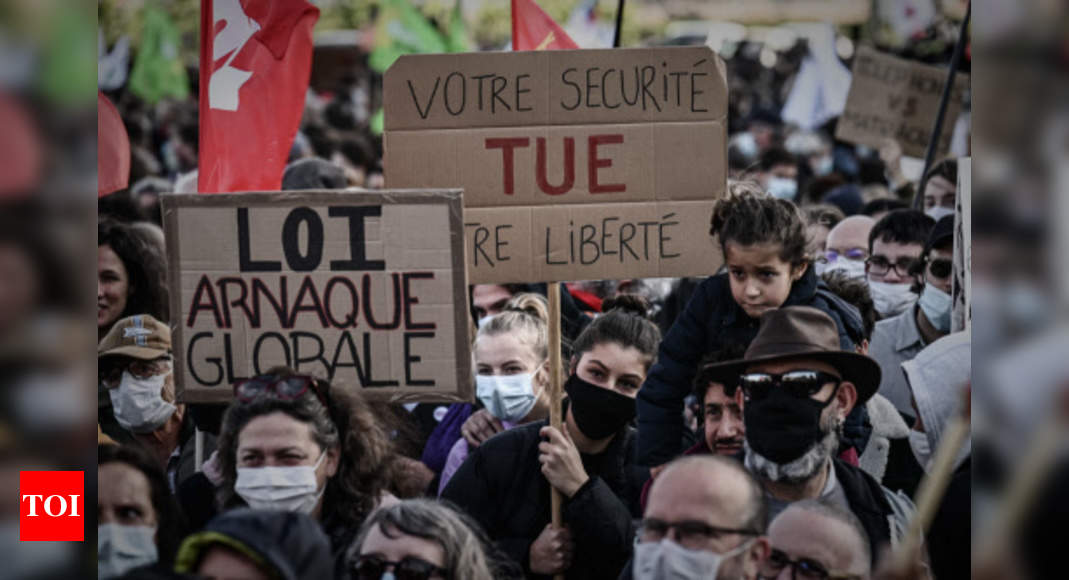 Demonstrations took place throughout France on Saturday against a controversial new bill that would ban police images and increase surveillance.

The French parliament is currently examining article 24 of the National Security bill, which proposes criminalising the filming and publication of images of on-duty police officers.

Media groups in France say it could impact journalists covering police operations, while other critics fear it’s intended to dissuade citizens from holding the police accountable.

It came after video images of three police officers beating a black music producer inside his studio in Paris went viral this week, causing an outcry that saw politicians, footballers and millions of social media users express their disgust.

But supporters of the law, above all Interior Minister Gerald Darmanin, say it is necessary to protect the identity of law enforcement officers who are at risk of harassment, threats and violence.

On Thursday, French Prime Minister Jean Castex said the government would review the wording of the draft law following the new scandal over police brutality.

There were some scuffles between protesters and police in the surrounding streets.

Thousands turn out in Nantes

Police say around 3,500 people took to the streets of the French city of Nantes on Friday night to demonstrate. Joint trade unions say the figure was between 6,00-7,000.

Demonstrators carried banners and placards reading “defence of individual and collective freedoms,” “no to the proposal for a comprehensive security law,” and “violence, the last refuge of incompetence,” as well as “not seen, not taken.”

The march began calmly, but scuffles broke out for an hour and a half from around 7:30 pm when police used tear gas to dispersed the crowd.

“I am not criticizing all the police officers, of course, we need a respectable police force, we need a trusted police force, but they have to clean up,” explained Camille, a 56-year-old demonstrator from Nantes.

“I am very angry,” she added. “To all the police officers who are doing their job correctly, I wish them good luck in this police force, which is drifting towards unacceptable things.”

Officers said they arrested 17 people, including six before 5.30 pm when the police asked protesters to open their bags when they arrived at the assembly point.

“Justice must quickly shed light on this police violence,” tweeted the mayor of Nantes Johanna Rolland, in reaction to the images of the beatings of the music producer in Paris.

“It is also urgent to create an independent control and sanction authority, in place of the IGPN (General Inspectorate of the National Police),” said Rolland.

In the face of criticism, the government added an amendment to the bill, specifying it “will only target images aimed at harming officers’ physical or psychological integrity.”

After clearing the lower house, the draft security law will now need to be approved by the Senate.

Some experts believe it could also face censure from France’s constitutional court.