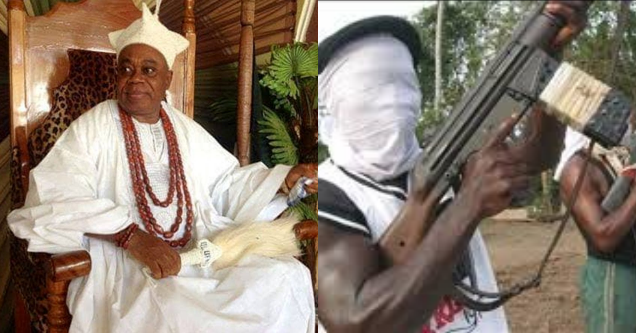 Ondo monarch, the Olufon of Ifon, Oba Israel Adeusi is dead. He was killed by gunmen in the Ose Local Government Area of Ondo State around 4pm today.

A relative of the monarch who confirmed this said Israel Adeusi was on his way from a meeting in Akure in his official car when he was accosted by gunmen and shot.

Preliminary reports indicate that no one else was attacked in the car and no item was stolen. His corpse has since been taken to the Federal Medical Centre.

According to PUNCH, a relative of the late monarch said, “He was in his official car which had his customised number plate. He drove to Akure for a meeting. But on his way back, on getting to a rough road along Elegbeka, he was accosted by gunmen and shot.

“It was clearly an assassination because nothing was stolen from the vehicle and the other two occupants of the vehicle were not harmed.”

A source disclosed that the state governor, Rotimi Akeredolu, who was informed about the incident, rushed to the hospital where the monarch was confirmed dead. He said the governor suspended all activities and travelled to Ifon when the incident was reported to him.

The state Police Public Relation Officer (PPRO), Tee-Leo Ikoro, said the command had been trying to get in touch with the Divisional Police Officer in the area to confirm the incident

Israel Adeusi ascended the throne about 23 years ago and was in his 60s.

Earlier this year, Oba Israel Adeusi gave his late mother, Mrs Abigail Fehintola Adeusi a befitting burial. Thewho is who in the society registered their presence at Ifon, headquarters of Ose Local Government Area of Ondo State, venue of the burial.

READ  PHOTOS: Teenager sustains spinal cord injury after she was violently beaten and raped by same man who allegedly raped her few months back