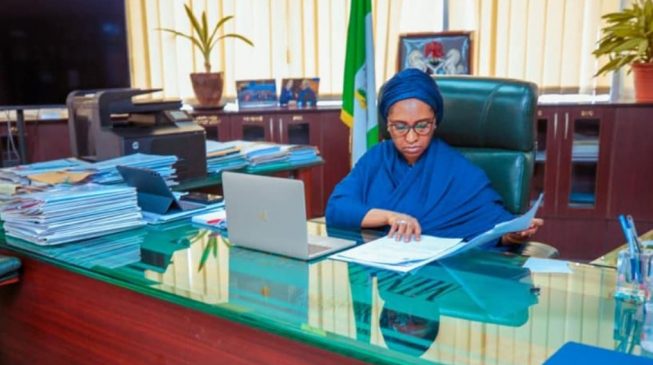 Zainab Ahmed, the Minister of Finance, Budget and National Planning, has revealed that Nigeria would emerge from recession in the fourth quarter of this year or by the first quarter of 2021.

Nigeria on Saturday, November 21, officially went into recession for the second time under President Muhammadu Buhari‘s administration, but this time, the worst since 1987.

Figures released by the National Bureau of Statistics (NBS) reveal that Nigeria is officially in a recession, with the West African country recording a contraction of 3.62 percent in the third quarter of 2020.

This online news platform understands that the development shows that this is the second consecutive quarterly GDP decline since Nigeria’s 2016 recession. The cumulative GDP for the first nine months of 2020, therefore, stood at -2.48 percent.

She blamed COVID-19 for the current recession, saying it followed the pattern across the world where many countries had entered an economic recession.

Zainab said: “Let me remind us that before the impact of COVID-19, the Nigerian economy was experiencing sustained growth, which had been improving quarter by quarter until the second quarter of 2020, when the impact of the COVID-19 was felt.”

The minister said other countries also in recession, including the United Kingdom and the United States, recorded much deeper contraction than that of Nigeria.

Ahmed said, “While the economy has entered into recession in the third quarter, the trend of the growth suggests that this will be a short-lived recession, and indeed by the fourth or, at worst, the first quarter of 2021, the country will exit recession.

“Our expectation of a quick exit, which will be historically fast, is anchored on the several complementary fiscal, real sector and monetary interventions that have been proactively introduced by government to forestall a far worse decline of the economy and alleviate the negative consequences of the pandemic.”