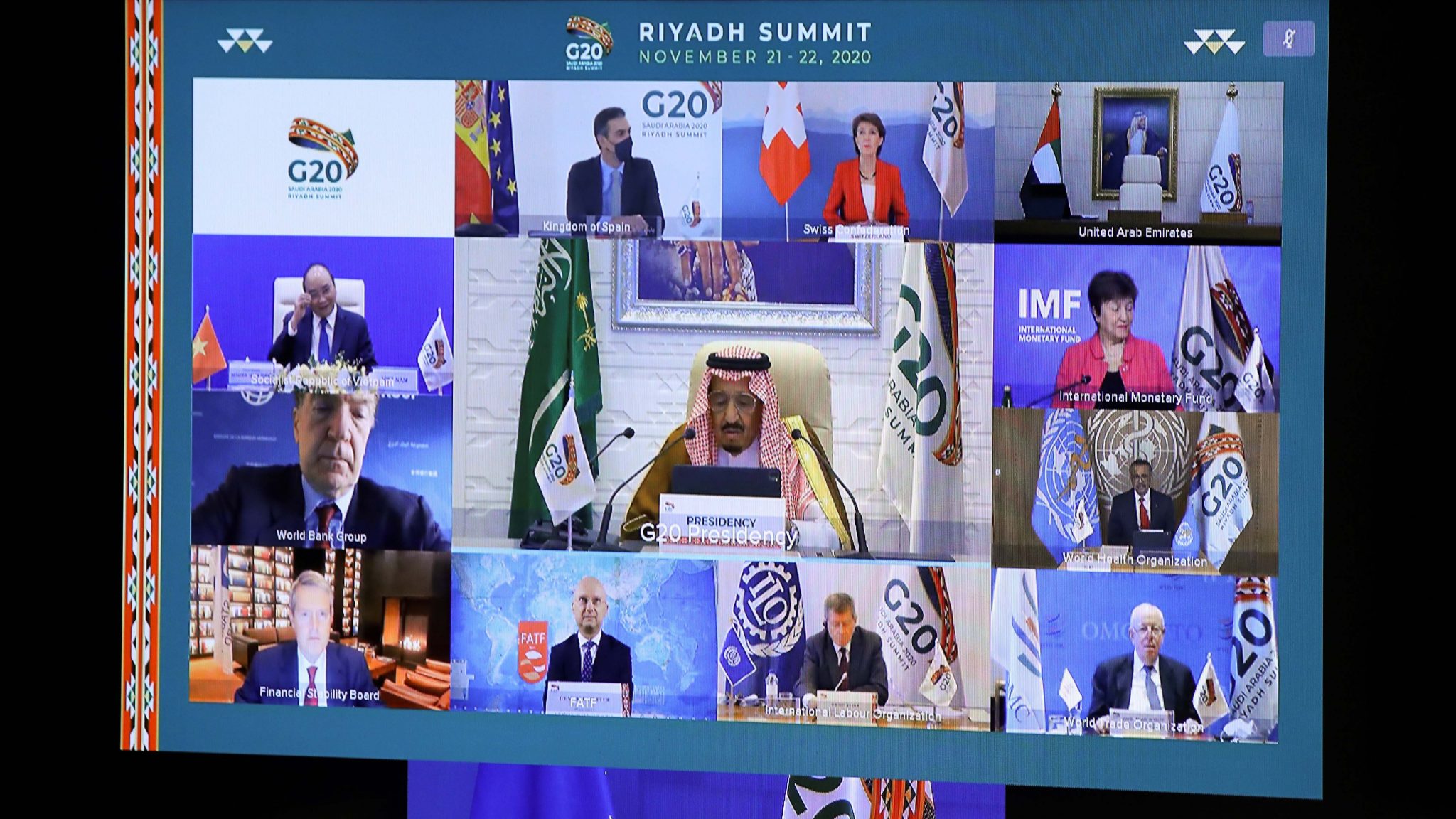 European Council President Charles Michel (down) and Saudi Arabia’s King Salman bin Abdulaziz Al Saud are seen with other state and institution leaders on a screen before the start of a virtual G20 summit hosted by Saudi Arabia and held over video conference amid the Covid-19 (novel coronavirus) pandemic, in Brussels, on November 21, 2020. – Saudi Arabia hosts a G20 summit on November 21 and 22, in a first for an Arab nation, with the virtual forum dominated by efforts to tackle the coronavirus pandemic and the worst global recession in decades. (Photo by YVES HERMAN / POOL / AFP)

aders will pledge to “spare no effort” in ensuring the equitable distribution of coronavirus vaccines worldwide and reaffirm support for debt-laden poor countries, according to a draft communique seen by AFP Sunday.
The leaders also struck a unified tone on supporting “multilateral” trade as well as the global fight against climate change, but the closing document lacks firm details on many of the issues dominating the virtual summit hosted by Riyadh.

The two-day gathering that began Saturday comes as international efforts intensify for a large-scale rollout of coronavirus vaccines after a breakthrough in trials, and as EU and other leaders call for G20 nations to plug a $4.5-billion funding shortfall.

“We have mobilised resources to address the immediate financing needs in global health to support the research, development, manufacturing and distribution of safe and effective Covid-19 diagnostics, therapeutics and vaccines,” the draft document said.

“We will spare no effort to ensure their affordable and equitable access for all people, consistent with members’ commitments to incentivise innovation.”

The communique offered no details on how the effort will be funded.

There could be changes in the final version of the document, which will be released later Sunday by the Saudi hosts.

In a comment echoed by other world leaders, French President Emmanuel Macron said Saturday the coronavirus crisis was “a test for the G20”, stressing there “will be no effective response to the pandemic unless it is a global response”.

G20 nations have contributed more than $21 billion to combat the pandemic, which has infected 56 million people globally and left 1.3 million dead, and injected $11 trillion to “safeguard” the virus-battered world economy, summit organisers said.

G20 nations have extended a debt service suspension initiative (DSSI) for developing countries until June next year, but UN Secretary-General Antonio Guterres has pushed for a commitment to extend it until the end of 2021.

The draft communique, however, did not offer a firm commitment.

G20 finance ministers will examine the recommendation when the IMF and World Bank meet next spring “if the economic and financial situation requires” an extension by another six months, it said.

On trade, the club of the world’s richest nations also emphasised that supporting a multilateral system “is now as important as ever”.

“We strive to realise the goal of a free, fair, inclusive, non-discriminatory, transparent, predictable, and stable trade and investment environment, and to keep our markets open,” the communique said.

See also  The US Travel Ban: 6 Important Lessons For Every Nigerian Traveler

Ahead of the summit, European Commission President Ursula von der Leyen said she hoped the US will adopt a more multilateralist stance under the incoming administration of Joe Biden.

Von der Leyen also added that she expected consensus and a “new momentum from the new US administration” on climate change, and a reversal of Trump’s withdrawal from the Paris climate accord.

Differences within the G20 group surfaced at last year’s summit in the Japanese city of Osaka as the United States demanded the insertion of a separate paragraph on issues such as environmental protection.

But under the Saudi chairmanship, G20 leaders projected a unified stance, with the draft communique reiterating support for tackling “pressing” environmental challenges.