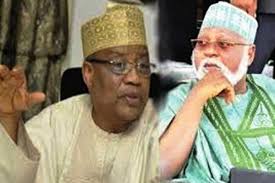 Babangida and Abubakar stated during a visit by the members of the Board of Trustees of the North Central Peoples Forum led by General Jeremiah Useni at their Uphill residences in Minna, Niger state.

The former Nigeria leaders noted that the formation of the forum is long overdue.

They stated that the new forum would lead to the development of the north-central region.

IBB which hosted the board members stated that he his surprised that the North Central has not formed its own group, particularly, politically, the region has more votes put together than both the south-west and south-south regions of the country.

According to him, “I have always wondered when I heard of groups from North West, North East, South-South and South-West and I kept wondering where we belong especially as God has blessed us with the quality and calibre of people in this region. I thought we were not playing our roles well.”

“I have had a good look at the contribution of the zone politically in terms of votes and I found out that your region has more votes than both the Southwest and the south-south and yet the south-south makes more noise than other zones.”

The former military president promised his support to the forum.

“I want to commend you for what you have done in forming this forum and I assure you that we will be with you and support you always. I know that you will be the envy of other zones because you have what it takes to be recognized as a strong and potent zone in this country.”

Commending the Board members, the elder statesman said, ”I congratulate you on the thought of the forum and forming the forum. We are expecting that the forum will have the same performances as those who are forming it as you have all achieved great strides in your various offices.”

“Certainly, you have our support in delivering the purpose of this forum. It will go a long way to minimize the disharmony between the people and between the amalgamation of all the tribes we have in the region and the country.”

He called on the forum to work assiduously in making sure that all abandoned sectors in the North Central region, most especially, the road are carried out.

Abdulsalami listed some of the roads to include Minna to Suleja, Yelwa to Jos, Lokoja to Kabba, Kabba to Offa, adding that, “these are the lifelines connecting us to the south but unfortunately through omission or commission, they are abandoned. I want to urge you to put your searchlight on this development.”

After the visits, the Chairman of the Board of Trustees of the North Central Peoples Forum, General Jeremiah Useni, told newsmen that the forum is encouraged with the support and blessings given by two former past Nigerian leaders.

”What the two leaders said will further galvanize our reports and next move. They have shown that they believe in what we are doing, and they also said what we have done is long overdue.”

General Useni was accompanied by the Secretary of the Board of Trustees, Khalid Bolaji, Micheal Onoja, Safianu Barje, Mike Onoja amongst others for the visit.