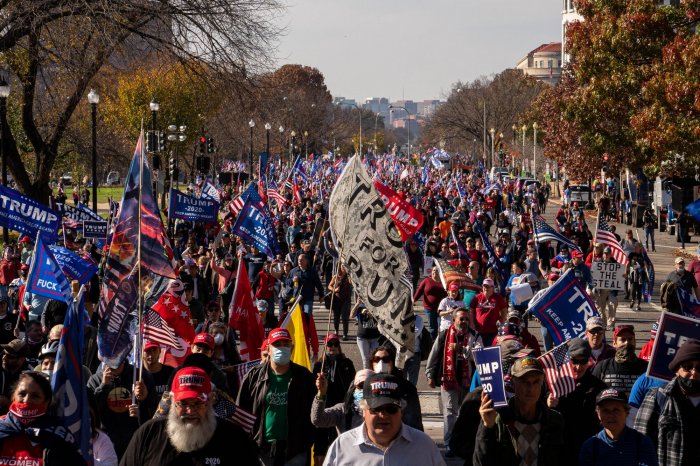 President Donald Trump’s supporters gathered in Washington on Saturday for a protest to back his unsubstantiated claims of election fraud as he pushes ahead with a flurry of longshot legal challenges to overturn Joe Biden’s election victory.

After night fell in the nation’s capital, demonstrators favouring Trump clashed in the streets with counterprotesters, videos posted on social media showing fistfights, projectiles and clubs. Police arrested at least 20 people on a variety of charges, including assault and weapons possession, officials said. One stabbing was reported, two police officers were injured and several firearms were also recovered by police.

Earlier in the day, Trump made a brief drive-past through the demonstrations in his motorcade as supporters, many waving “MAGA” – or “Make America Great Again” – flags, cheered.

The president smiled at demonstrators shouting, “USA! USA!” from the car window, but he did not step out.

A crowd of people on the city’s Freedom Plaza, with more still arriving from all sides, waving flags and shouting “Four More Years” in a festive atmosphere reminiscent of a Trump rally.

With right-wing militia group the Proud Boys also among those rallying, a large security presence was deployed in the capital to prevent clashes with anti-Trump events scheduled outside the Supreme Court.

The 306 votes was equal to Trump’s tally in his 2016 victory over Hillary Clinton, which at the time he called a “landslide”.

The final two undeclared states were called on Friday by US television networks – with Biden winning the former Republican stronghold of Georgia in a close race, and Trump winning North Carolina.

Trump however continues to impede Biden’s ability to prepare for his transition ahead of inauguration on January 20 and has filed numerous lawsuits – unsuccessfully – to challenge vote counts around the country.

On Friday, a judge in Michigan issued another rejection of Republican claims of fraud.

But Margarita Urtubey, 49, a horse breeder who flew in from Miami to Washington with her sister, told AFP the election was “so corrupt,” adding “Trump won by a landslide. We are here to march for the ‘stop the steal’ of this election, to make our voice heard.”

Darion Schaublin, who drove from Columbus, Ohio, came to protest the fact “the whole system’s rigged… in the way that the information is getting to the people.”

“The truth never actually gets out,” said the 26-year-old, who says he lost his job in a restaurant after refusing to wear a mask as protection from Covid-19.

Schaublin estimated there was a “95 percent” chance Trump would not have a second term – “and I’m not sure of the legitimacy of that.”

Organisers have given the rallies various names, including the Million MAGA March, the March for Trump and Stop the Steal.

Protesting against the marches, opponents on social media sought to create confusion by flooding the hashtags #MillionMAGAMarch and #MarchforTrump with photographs of pancakes.

READ  Southwest would benefit by voting for Buhari in 2019 – Fashola

Some Trump opponents and left-wing groups have also planned counter-demonstrations in Washington and other cities.

Trump on Friday said “time will tell” if he remains president, in a momentary slip of his unprecedented refusal to concede his election defeat.

He broke his silence after a week without on-camera comments, speaking at a Rose Garden event to herald the imminent authorization of a coronavirus vaccine.

During a short speech about the vaccine work, Trump insisted that he would never again call for a lockdown to curb the virus’s spread.

He then added, “Whatever happens in the future, who knows which administration it will be, I guess time will tell.”

The hint of doubt came despite him continuing to claim that mass fraud — for which no evidence has been produced — robbed him of victory in the November 3 election.

Despite his own intelligence officials’ declaration Thursday that the election was “the most secure in American history,” Trump and his right-wing media allies show no sign of giving up their quest to get the results overturned.