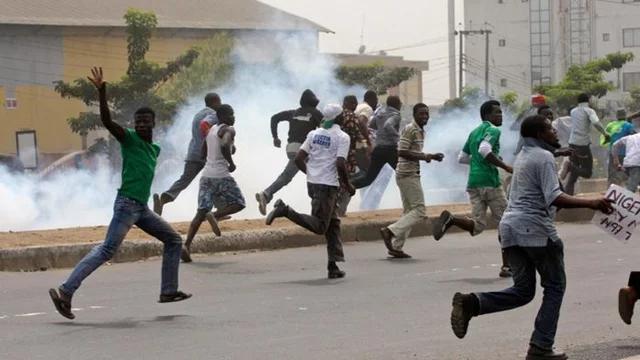 A fracas ensued in the Ejigbo area of Lagos on Friday morning after a Hausa Okada man, stabbed a Yoruba transport union leader, leading to his death.

Reports said it took the intervention of the police for the incident not to degenerate into a free-for-all.

According to Daily Post, the Hausa okada man had driven against traffic around 11 pm on Thursday and hit the victim.

However, the victim identified simply as Oke, who was the Chairman of the Tricycle Owners and Operators’ Association of Nigeria (TOOAN) area, challenged him for hitting him with the okada.

It was learnt that the Hausa okada man left the scene in anger only to return with a knife with which he stabbed the union leader.

An eyewitness said that the okada man vanished into thin air after committing the dastardly act.

Although the victim was rushed to a nearby hospital, he gave up the ghost Friday morning.

The DPO of Ejigbo Divisional Police Headquarters, CSP Akinsola Ogunwale, who confirmed the incident, said that Oke died because of excessive blood loss.

He said that after news of his demise filtered into Ejigbo, Yoruba people began to attack Hausa people in retaliation.

The police officer said he mobilised his men to the area to prevent a further breakdown of law and order as well as forestall a full-blown inter-ethnic war.