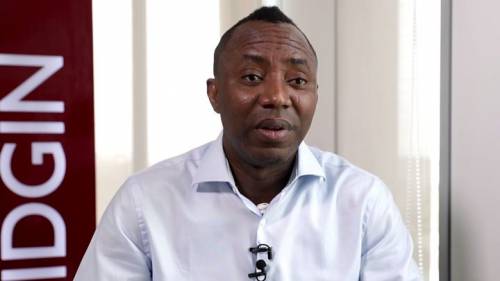 Rights activist and Convener of #RevolutionNow Movement, Omoyele Sowore, has said his life is been threatened by the Nigerian government, as they are planning to arrest and kill him.

Sowore made this known in a series of tweets yesterday, as he noted that the Nigerian military had put a bounty on his head for him to be either arrested or killed.

See his tweets below:

#RevolutionNow Info reaching me now is that a signal from DIA has put a bounty on my head, that I must be arrested or murdered as they claim I’d resist arrest in the next 24hrs! This is from the Defence HQ here is Abuja! Be it known that this can’t affect the struggle for freedom

Just yesterday @MalamiSan went to an FCT court headed by Justice AB Muhammed to obtain an exparte order against me and @SaharaReporters, he want to make it look like his part of it is “civil” to pretend he wasn’t part of the assassination squad they put together!

Over the week their minions wrote press releases, letters to foreign embassies, @TheNationNews was generous in claiming some “Genuine EndSars” people want me arrested. The @HQNigerianArmy had a team of @twitter influencers on Sunday suggesting I should be assassinated

The alarm by the activist comes as the President Muhammadu Buhari-led government continues its clampdown on major actors and promoters of the #ENDSARS protest.