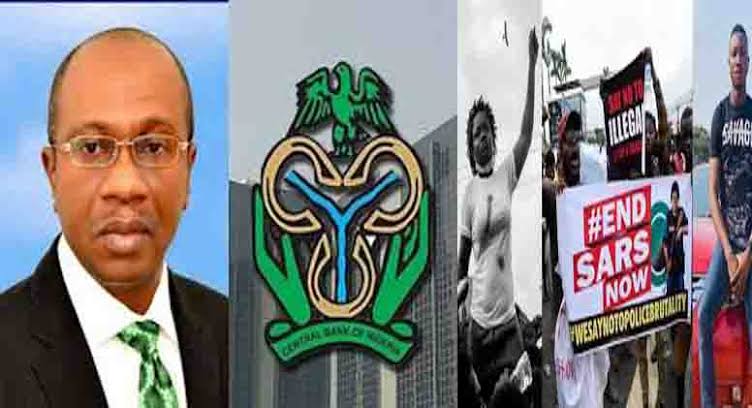 The Central Bank of Nigeria was granted approval to freeze the accounts of 20 #EndSARS campaigners after linking the funds in their account to suspected terrorism activities.

A written address in support of a motion ex parte filed by the CBN before Justice A. R. Mohammed of the Federal High Court in Abuja revealed this.

The suit is listed with number FHC/ABJ/CS/1384/2020 and did not identify the defendants as ENDSARS campaigners.

The written address read in part, “My lord, the nature of the transactions undertaken through the defendants’ accounts are of suspected terrorism financing in contravention of Section 13(1), (a) and (b) of the Terrorism (Prevention)(Amendment) Act, 2013 and Regulation 31(2), (a) and (3), (b) of the Central Bank of Nigeria Anti-Money Laundering/Combating the Financing of Terrorism Regulations, 2013.”

In a supporting affidavit deposed to by one Aondowase Jacob on behalf of the CBN, it was stated that the Head of the Economic Intelligence Unit of the Governor’s Department, CBN, Joseph Omayuku, had conducted an investigation on the accounts of the defendants and other individuals and entities held with certain banks in Nigeria.

According to the affidavit, the investigation showed that the owners of the accounts may have been involved in terrorist activities. It added, “there is a grave allegation that the defendants are involved in suspected terrorism financing via their bank accounts in contravention of the provisions of extant laws and regulations. The aforesaid transactions undertaken by the defendants, using their bank accounts, can cause significant economic and security harm to the public and the Federal Republic of Nigeria if left unchecked.

READ  Belgian bars and restaurants will close on Monday

“The applicant (CBN governor) is thus desirous to have the court empower him to direct the freezing of the 20 accounts listed on the annexure to this application and all other bank accounts held by the defendants.

“A freezing order of this honourable court in respect of the defendants’ accounts would also enable the investigation of the activities of the defendants to a logical conclusion with a view to reporting same to the Nigerian Financial Intelligence Unit.”

The apex bank said unless the order was granted, it would not be able to ensure that the money remained intact, while investigations were ongoing.

The 20 accounts frozen by the CBN are domiciled in Access Bank, Guaranty Trust Bank, Fidelity Bank, United Bank for Africa and Zenith Bank. The accounts were said to have been flagged after they received money with the narration #EndSARS.

One of the #Endsars campaigners, Bassey Israel, a pharmacist, who was in charge of the #EndSARS medical team in Port Harcourt, had earlier stated that his account with Access Bank marked 003397XXXX had remained frozen since October 15.

Israel said he learned of the development when he visited the bank to find out the reason for it. He said he was informed by a bank officer that the directive came from the apex bank. “I am in charge of End SARS medical team in Port Harcourt and we had people donating for medical supplies, food, water, ambulance services, and these donations were made directly into my account and of course these donations had End SARS descriptions so I think that was how they were able to flag my account. I noticed that on October 15, I was trying to make a debit transaction on my account and noticed that there was a restriction.

READ  Belgium will go back into lockdown

“So, I called the bank and I was told that there was indeed a restriction but I should go to any branch near me and when I did so, the branch manager sent a mail to the branch where I opened the account. The response to the mail was that there was a directive from the CBN to restrict the account.

“The lady was surprised and even asked me if I had any issue with the CBN and I responded that if I had any issue with the CBN, I wouldn’t be in the bank in the first place, I would be on the run. I asked what could be done and she gave me no answer. She had to show me the mail on her computer which I read. It was directly from the CBN and it read, ‘Place this account on PND”, he added.

Another #EndSARS protester who spoke on condition of anonymity said she had also been informed by her bank that her account has been placed on ‘Post No Debit’.