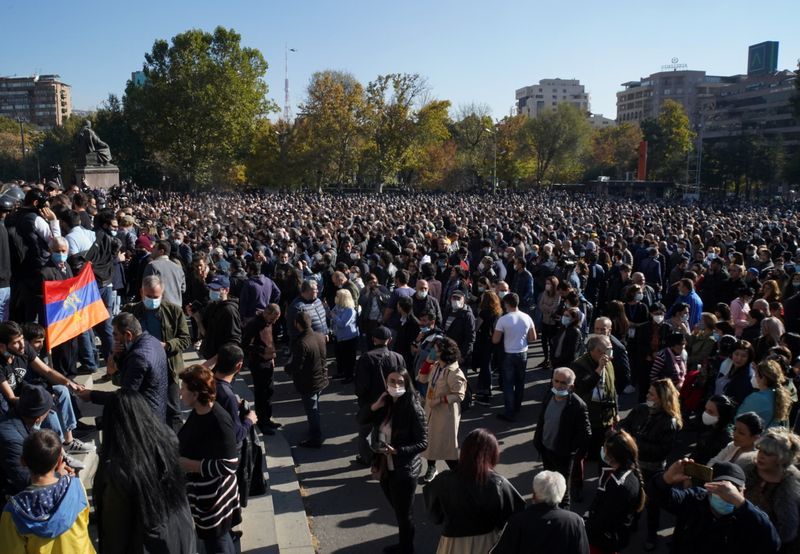 Armenian police arrested an opposition leader and several others who tried to stage a rally on Wednesday demanding Prime Minister Nikol Pashinyan resign over a cease-fire deal that ended fighting with Azerbaijan in Nagorno-Karabakh.

The protesters briefly chanted “Nikol is a traitor!” before they were detained in the capital Yerevan, but others started gathering to protest after their arrest, witnesses said.

Street rallies are banned under martial law, imposed by Armenia because of the fighting in Nagorno-Karabakh, an enclave internationally recognized as part of Azerbaijan but populated and until recently fully controlled by ethnic Armenians.

Seventeen political parties scheduled the rally after calling on Pashinyan to quit on Tuesday over the terms of the cease-fire deal, which froze territorial gains made by Azeri forces in fighting that broke out on Sept. 27.

Among those arrested were Gagik Tsarukyan, leader of the opposition Prosperous Armenia Party, according to a Facebook post by Hripsime Arakelian, a member of his party.

The agreement was celebrated as a victory in Azerbaijan, which had been trying to regain land lost during a war in the 1990s. In Armenia, it triggered unrest from crowds who stormed government buildings on Monday and branded the deal a betrayal.