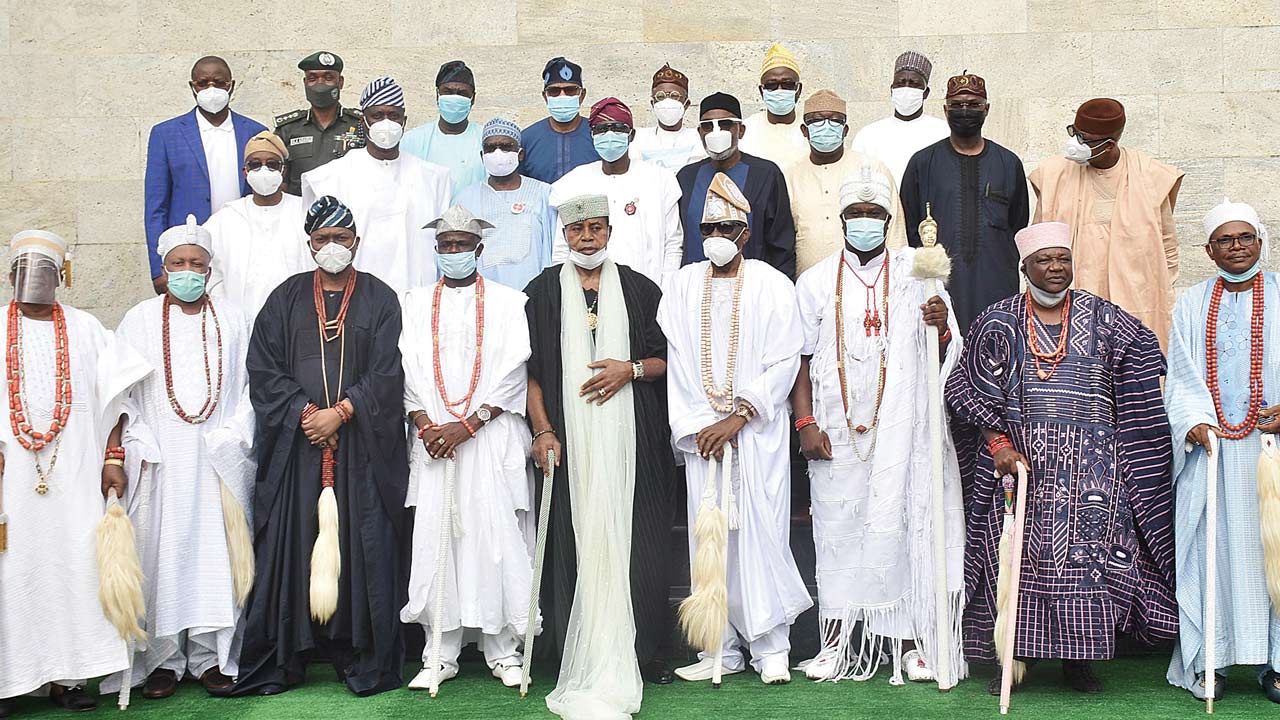 Southwest traditional rulers, governors and ministers at a ­­­­­peace meeting with Chief of Staff to the President, Prof. Ibrahim Gambari and the Inspector General of Police, Mohammed Adamu in Lagos…yesterday.

Yoruba leaders, yesterday, told President Muhammadu Buhari to urgently make practical moves to return the country to true federalism to avert resurgence of the mayhem that characterised the recent #EndSARS protests and save the nation from disintegration.

At a meeting held in Lagos at the instance of President Buhari over the protests that started in Lagos and spread to other parts of the country, the Yoruba leaders also suggested ways the country can overcome some of the current challenges threatening its corporate existence.

The monarchs also said the Federal Government must devolve more powers to the states, especially in the areas of security and economy, else the country would continue to sit on a keg of gunpowder with the possibility of another mayhem worse than what was witnessed in Lagos during the protests.

Speaking in turn at the meeting held at the State House, Alausa, Lagos, the monarchs sternly warned the various governments, politicians and other critical stakeholders against treating the issue of youth unemployment and insecurity lightly, saying they could destroy the country. They cautioned that the two problems, which they identified as part of what triggered the recent youth protests that was later hijacked by hoodlums, were almost getting out of hand.

READ  Nigerian Man Who Waited For 23 Years To Become A Father, Dies 7 Months After Welcoming A Set Of Twin Boys

In the 13-points communiqué signed by Akeredolu and Ooni of Ife after the deliberations, the stakeholders stressed the need to adjust and overhaul the security architecture of the country to adequately address the threats and realities of insecurity. “There should be more police presence in communities in the Southwest states,” the leaders demanded.

They also emphasised the need for the Federal Government to review reports of the various constitutional conferences, including the 2014 National Conference and implement some of the recommendations, especially with reference to security, economy and equal treatment for citizens all over the country.

“We express appreciation to Mr. President and his administration on the responsiveness to the initial demands of the #EndSARS demonstrators and for his firm handling of the aftermaths of the protest.

“We endorse the call by traditional rulers for regular consultations with state governors and federal authorities on challenges facing states and for appropriate recognition of their role in the constitution. The security architecture of the country requires adjustment to adequately address the threats and realities of insecurity in the country. There should be more police presence in communities in the Southwest states. While there are legitimate concerns contained in the initial #EndSARS movement, these have been hijacked by criminals and other elements with ulterior and negative forces and degenerated into anarchy,” the statement read in part.

The leaders called for preventive measures to prevent repeat of what happened in the country following the #EndSARS demonstrations, saying that security must be strengthened in all states.” They urged the government to respond to the needs of the Nigeria Police just as they appealed to the security personnel to do more to protect life and property and enhance security all over the country.

“We call for specific measures and proposals to repair damage done to the physical infrastructure and economic assets of the South West. We believe that the prolonged closure of the border has caused economic difficulties and should be re-examined to alleviate problems of the people in the border communities and prices of some essential commodities. There is need to review the closure and permit resumption of economic and trading activities,” the monarchs stated.

They also called for a comprehensive programme that will address youth employment and empowerment, which must be prioritized. “There is need for closer coordination and complementarity between the states and the Federal Government in this regard. The curricular of tertiary institutions should be reviewed, with emphasis placed on skills acquisition and entrepreneurship.”

The communiqué further read: “We recognize the damaging and negative impact of fake/false news and worry about its destructive and dangerous potency. We call on Federal Government to use the instrumentality of existing laws and those regulations bench-marked from other countries to provide safeguards against the spread of fake news. The 2015 Cyber Act should also be fully used.

“We urge that every effort should be made to resolve the impasse between the Academic Staff Union of University (ASUU) and the Federal Government so that students can return to school in earnest.”

Akeredolu warned that such mayhem that happened in Lagos and across the Southwest with wanton destructions of monuments should not be allowed to repeat itself. “This is the reason for the deliberations. We must take positive steps and have our security agents working with us. This is our home, we must not allow it to be destroyed.” Sanwo-Olu said the journey to rebuilding the damaged property in Lagos had begun.

In his address, the Ooni of Ife urged the southwest governors, whom he accused of keeping far distance from the traditional institutions, to close the gap.

“If there was no such gap, the mayhem in the noble agenda of the #EndSARS protesters would not have occurred,” he said.

Alaafin of Oyo said there was need to restructure the country, noting that the current arrangement cannot solve unemployment and security challenges. “Unless we practice true federalism, unitary system cannot help move us forward.”

Oba Akinruntan urged the government to unravel those that are behind the carnage in Lagos and across the Southwest after the protest.

“The mayhem in Lagos must be investigated. Governor Sanwo-Olu did well in the management of the COVID-19 pandemic and I strongly believe that those who are jealous of him wanted to rubbish him (Sanwo-Olu).” The Olugbo urged the IG to appeal to his men to come out and protect life and property. “Before the end of this week, we want to see police outside doing their jobs.”

Akiolu said: “My prayers for those politicians who hijacked the mayhem is that God would forgive them for they know not what they are doing. I canvass for special status for Lagos.”

He also said politicians should reduce to the barest minimum the way they flaunt wealth without attending to the needs of the governed. “What happened in Lagos is a pure case of security breach and the government must investigate it,” he said.

The Alawe of Ilawe, Oba Adebanji said the Federal Government should revisit the 2014 National Conference reports. In his response, Gambari said, “President Buhari is so emotional about the carnage in Lagos, especially when Governor Sanwo-Olu presented the graphic details of the damages in Aso Rock last week.” He assured the gathering that the president is committed to implementing whatever report from the meeting, especially on police reform.