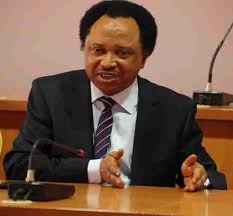 Nigeria cannot survive as a nation, if a section of the country continues to dominate the political leadership of the country, warns Shehu Sani, who represented Kaduna Central in the 8th Senate.

Sani gave this warning in Abuja, weekend, at the annual public lecture of the Human Rights Writers Association of Nigeria (HURIWA), themed ‘Challenges of leadership in the 21st Century Nigeria’.

He cautioned that as long as a section of the country continued to dominate the its leadership positions, it would be a matter of time and the centre would no longer hold, saying that all Nigerians and sections should be given a sense of belonging.

The politician-cum-human rights activist identified justice, where all citizens and sections are treated as equal, as the only thing that could hold the country together, stressing that the recent EndSARS protests across the country were the youths’ reaction to entrenched injustices in the land.

“When one part of the country dominates political power to the disadvantage of other parts, there is no national anthem, no national flag and no constitution that can preserve such a country; it’s a question of time. We must be able to tell the truth to power,” he stated.

According to him, when the northern governors met recently, their emphasis was to condemn EndSARS and social media, but never talked about insecurity.

HOWEVER, HURIWA has asked the Minister of Humanitarian Affairs and Disaster Management, Sadiya Farouq, to stop trying to deceive gullible Nigerians over the carting away of coronavirus disease (COVID-19) palliatives by hungry citizens to justify her claims of incorruptibility.

In a statement yesterday in Abuja by the National Coordinator, Emmanuel Onwubiko, and National Media Affairs Director, Zainab Yusuf, HURIWA accused the minister of being “clever-by-half” by trying to assert that the foodstuff carted away from the warehouses during the protests were donated by the private sector.

The rights group wondered why the media, who ought to set the agenda and be at the forefront of asking government officials to explain how they spent public funds in their custody during the lockdown, allowed politicians to use them for propaganda.

HURIWA maintained that the foodstuff taken by hungry and desperate Nigerians in some of the states were wholly donated by the Coalition Against COVID-19 (CA-COVID), which allegedly collected millions of dollars worth of aid for COVID-19 victims and given it to the government. It added that many states halted distribution of the aid since the easing of lockdown.

“HURIWA wonders how this minister seeks to tie a ball of wool around the eyes of over 200 million Nigerians to confuse us into believing that her ministry is populated by angels when she is mixing up the facts, including the inherent and self-evident truth that the foodstuff looted from states by hungry and desperate Nigerians were actually donated by corporate organisations and not by her ministry, and that indeed the donations were made through the Central Bank of Nigeria (CBN) on Covid-19 was responsible for making sure that these items reach the intended beneficiaries.

“So what is the nexus between what the private sector donated and was shared to states and what the Ministry of Humanitarian Affairs and Disaster management coordinated under the Social Investment Programme (SIP) and the School Feeding Programme (SFP)?” It stated.

Before the protests, the minister had reportedly told Nigerians that she fed school children when the whole schools were on lockdown, which led to demands for accountability. But recent reports have it that she claimed the palliatives were looted during the protests.

The group added: “This is incredible. Has the minister forgotten that even the lackeys in the National Assembly had also called for a total review of the process while governors urged President Muhammadu Buhari to reform the process of the distribution of the palliatives? Why is the minister bringing confusion to run away from demands for accountability?”

It, therefore, called on the minister to make herself available for public debate, to tell Nigerians how the SFP she did during lockdown suddenly found justification in the looted foods from the warehouses.