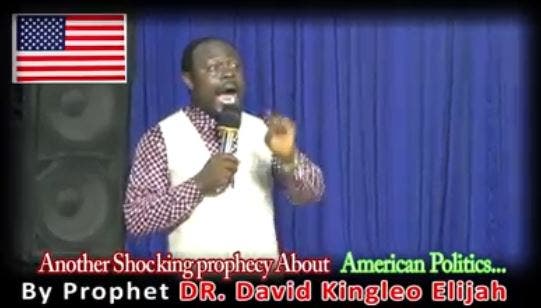 A pastor at Glorious Mount of Possibility Church, Yaba, Lagos, David Elijah, is being ridiculed on social media following his fake prophesy that President Donald Trump would win the just-concluded presidential election in the United States of America.

The pastor, as shown in a trending video on social media, also prophesied that a popular politician wiould die upon Mr Trump’s victory.

“If care is not taken and prayer is not made I see a politician in America committing suicide because of Donald Trump”, he told his congregation.

He assured his church members that “God is behind Donald Trump and He’s behind him”.

The pastor also admonished his church members that if they supported Mr Trump “God will work for his children”.

Nigerian pastors are well known for making prophesies on local and international matters. Many of them have been ridiculed in the past after their prophesies failed to come true.

Mr Biden was elected the 46th president of the United States in his third attempt at the presidency. In the same vein, Kamala Harris is the first woman to be elected U.S. vice president.

Earlier in February, Pastor Elijah vowed to travel to China to destroy coronavirus after claiming the Chinese lacked good prophet to help them combat the deadly disease.

He made the claim just as Nigeria confirmed its index case, an Italian citizen who arrived Lagos from Milan.

“I am going to China to go and deal with coronavirus. I am going prophetically to destroy coronavirus. Give me children there, where there’s a prophet, people will not die. I cannot be a prophet and I am in this world and China is dying.

“It’s not possible. No more coronavirus, if the enemy is operating because he thinks he can destroy China maybe because China does not have a prophet. There’s a prophet from the eastern part of Nigeria, and the major prophet is on this altar and my prophecy is that coronavirus is over.

“Put your hands together for Jesus. No more coronavirus in Jesus name,’” Pastor Elijah said then.

The world is still battling coronavirus till this day, and Pastor Elijah is not known to have made any trip to China to crush the pandemic.