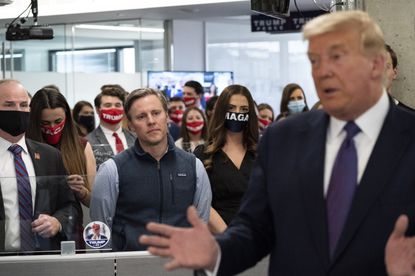 The lead by Joe Biden, the Democratic candidate, in the country’s presidential election, had been faulted by the US President Donald Trump.

Biden, a former vice-president, is currently leading Trump with 238 electoral college votes, as the incumbent and Republican nominee, has polled 213 so far.

Trump has however in the last two hours tweeted that there has been alleged fraud in the process.

“They are working hard to make up 500,000 vote advantage in Pennsylvania disappear,” he said, adding that the discovery of votes for Biden in some states is “bad for our country”.

The US president said it is “very strange” that the margin by which the Democratic presidential nominee is leading is increasing after mail-in ballots were counted.

“Last night I was leading, often solidly, in many key States, in almost all instances Democrat run & controlled. Then, one by one, they started to magically disappear as surprise ballot dumps were counted. VERY STRANGE, and the “pollsters” got it completely & historically wrong!,” Trump tweeted.

In another tweet he said: “How come every time they count Mail-In ballot dumps they are so devastating in their percentage and power of destruction?”