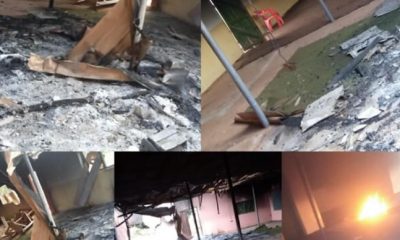 The Enugu Youth Coalition has described as fake the report that mosques belonging to Hausa communities in the state were set ablaze as a result of some heated argument during the last weekend.

EYC in a statement signed and released by its National Coordinator, Dr. Edwin Obune, on Monday, November 2, said the group is doing all it could to protect the interest of all religions in Enugu State without minding activities of some politicians whose job is to instigate crisis and undermine peaceful coexistence between different faiths in the state.

The statement was coming after some Hausa youths in the state reportedly attacked a tricycle rider and stabbed him in the chest.

The chaos reportedly started after one Aisha, a tomato seller engaged in a heated argument with a tricycle rider who carried her from a long distance. Reports had it that the tricycle operator had carried Aisha with her perishable goods to the Army barracks on an agreed payment of N750. However, upon reaching her destination, Aisha offered to pay him N500 instead of the agreed amount.

She was said to have contacted her siblings who stormed the scene and beat up the tricycle rider to a pulp. According to reports, the Enugu youths who were angered by the attack stormed the scene also in numbers and descended on the Hausa youths, burning down two mosques.

However, EYC on Monday urged well-meaning citizens especially the Muslims to ignore the report, describing it as fake.

The statement reads; “The attention of Enugu Youth Coalition has been drawn to the fake news report claiming that some mosques belonging to Muslim worshippers in the state were set ablaze in Enugu State last weekend.”

“In a statement released to newsmen by the National Coordinator of the group, Dr. Edwin Obune, the group said the veracity of such claim is yet to be established but promised that the group will do everything possible to protect adherents of all religions in the state without minding what some self-centred politicians are doing to instigate crisis and undermine the peaceful co-existence of all religions in the state.

Nevertheless, we believe that there were pockets of violence caused by some hoodlums who hijacked the #ENDSARS Protests in the state but not to the extent of destroying worship centres belonging to our Muslim brothers and sisters as reported in the media.

As we have all seen, the Enugu State Government under the able leadership of Governor Ifeanyi Ugwuanyi is non-discriminatory and have demonstrated his tireless commitments towards religious and inter-faith harmony and peaceful co-existence in the state.

This is a peace-loving governor who has spent most of his time’s building friendship, mutual harmony and peaceful co-existence across the state and beyond.

We don’t understand why these politicians want the most peaceful state in the country to boil at all cost. Must everything be sacrificed on the altar of future political calculations?

“We, therefore, call on well-meaning Nigerians especially the Muslim Ummahs to ignore the fake news report orchestrated by mischief-makers in our midst who want crisis to engulf the peace state so that their desire for the declaration of a state of emergency in Enugu would be achieved.”

“No matter what they do, Enugu State remains in the Hands of God!.”

Meanwhile, a Nigerian pastor working with the New Baptist Church and a female assistant has allegedly been murdered by an inferno at the home of a jealous lover’s girlfriend.