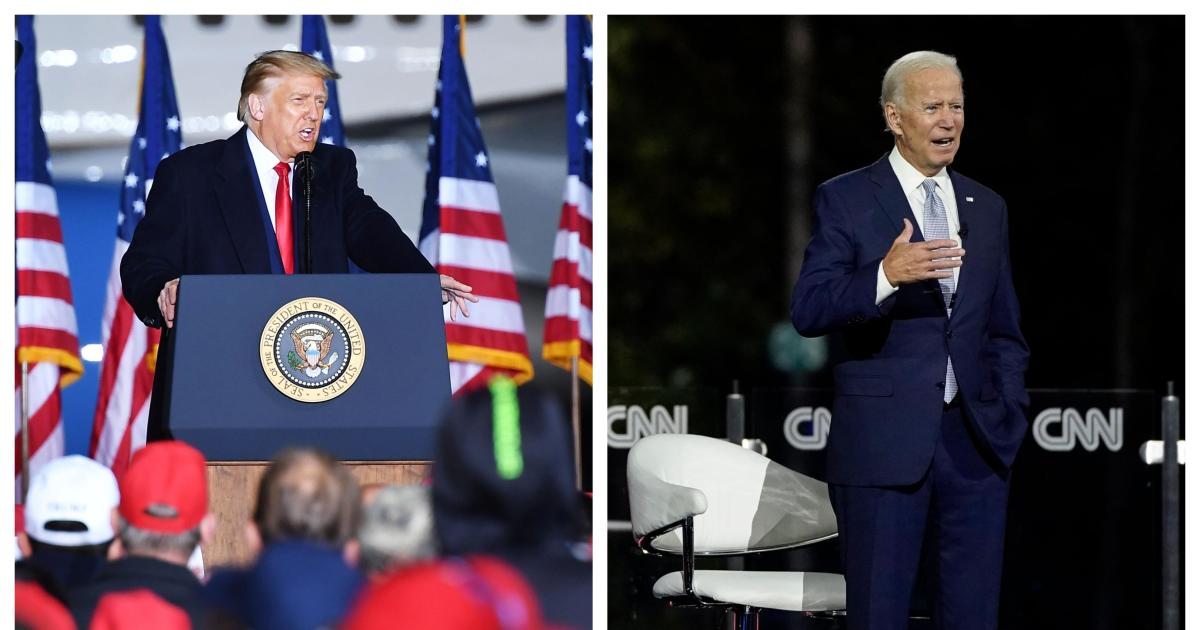 President Donald Trump and Democratic rival Joe Biden rallied supporters on Thursday in the closely fought state of Florida, highlighting their contrasting approaches to the resurgent coronavirus pandemic as the clock ticks down to Election Day.

Opinion polls show Biden with a significant edge nationally, but with a tighter lead in the battleground states that play a decisive role in the final result.

A Reuters/Ipsos poll released on Wednesday showed Trump had essentially moved into a tie with Biden in Florida, with 49 percent saying they would vote for Biden and 47 percent for the president.

With its 29 electoral votes, the state is a major prize in Tuesday’s election. Trump’s victory in Florida in 2016 was vital to his surprise election win.

Thousands of people, many of them without masks, crowded together at an outdoor event in Tampa on Thursday to hear Trump mock his opponent, the former vice-president.

Hours later, Biden arrived in the same city to hold a “drive-in” rally, where attendees remained in or near their cars to avoid the possible spread of the coronavirus. It was Biden’s second such event of the day in Florida. Supporters wore masks, as required by Biden’s campaign, although they did not always maintain social distancing.

Biden criticised Trump for holding what he termed a “super-spreader event” and attacked the president’s repeated assertion that the country had moved past the worst days of the pandemic, despite rising cases nationwide.

“Donald Trump has waved the white flag, abandoned our families and surrendered to this virus,” Biden said. “But the American people never give up; we never give in.”

Shadow of the pandemic

The pandemic that has upended life across the United States, killed more than 227,000 people and caused millions of job losses is roaring back.

On Thursday more than 91,000 new US infections were recorded, according to a Johns Hopkins University tally, the highest 24-hour total since the pandemic began.

Trump has repeatedly dismissed the threat of the pandemic, saying this week his opponents and the news media would stop paying attention to it right after the election, even as leaders in Europe scramble to contain a second wave and public health experts predict a grim winter in the United States.

Trump’s own White House coronavirus task force is warning of a persistent and broad spread of Covid-19 in the western half of the United States, including in a number of states that will play an important role in the election.

The Republican president hailed figures released on Thursday that showed the US economy grew at an unrivaled annualized pace of 33 percent in the third quarter because of a huge federal pandemic relief program.

“So glad this great GDP number came out before November 3rd,” Trump wrote in a tweet. US output however remains below its level in the fourth quarter of 2019, before the pandemic hit.

Following his own bout with Covid-19, the president has had a hectic campaign schedule, holding as many as three rallies a day in different states, while Biden has taken a more measured tack, spending two days this week close to his home base of Delaware.

A planned Trump rally in Fayetteville, North Carolina, for Thursday night was postponed because of a wind advisory stemming from Hurricane Zeta, Trump’s campaign said. The president plans to return to the Midwest on Friday, campaigning in Michigan, Wisconsin and Minnesota. He plans to visit 10 states in the last days of the campaign and will host 11 rallies in the final 48 hours, a campaign official said.

Biden’s own Tampa speech was cut short by a sudden downpour. He is expected to travel to Wisconsin, Minnesota and Iowa on Friday.

More than 80 million Americans have already cast ballots in the presidential election, according to a tally on Thursday from the US Elections Project at the University of Florida, setting the stage for the highest participation rate in over a century.

That surge includes more than 51 million ballots cast by mail, a long-standing practice of American elections that is surging in popularity because of the pandemic. State officials and experts have warned that it may take days or even weeks to tally them as some states have rules that forbid counting early votes before Election Day.

Florida is home to large Latino populations, with Cuban Americans in the south of Florida traditionally tending to favor Republicans, while newer communities of Puerto Ricans in central Florida lean toward the Democrats.

Biden’s campaign tried on Thursday to dampen concerns among Democrats that Biden is not reaching Latino voters nationally as well as former President Barack Obama once did.

“We are 100 percent on track to match or exceed the Obama Latino vote numbers in 2012,” Matt Barreto, co-founder of the polling and research firm Latino Decisions, said on a media conference call organised by the Biden campaign.