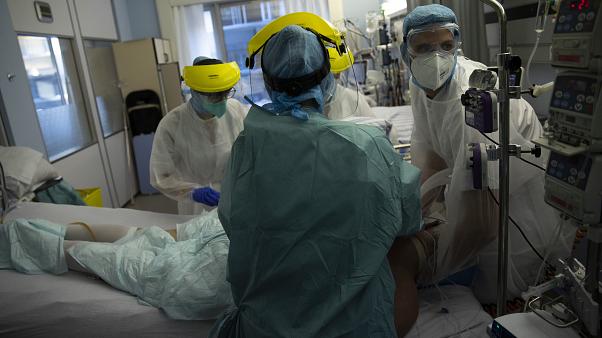 A total of 1,057 Covid-19 patients are currently admitted to Belgian intensive care units, according to Sciensano’s latest figures on Friday.

An average of 618.4 patients were admitted to hospital between 22 and 29 October, which is a 77% increase compared to the week before, and passes the peak of 561.7 daily hospitalisations in April.

Additionally, between 20 and 26 October, an average of 15,316.3 new people tested positive per day, which is an increase of 38% compared to the week before. On Tuesday 20 October, the number of people testing positive rose to 19,123 new infections.

The total number of confirmed cases in Belgium since the beginning of the pandemic is 392,258. The total reflects all people in Belgium who have been infected, and includes confirmed active cases as well as patients who have since recovered, or died as a result of the virus.

Over the past two weeks, 1,609 infections were confirmed per 100,000 inhabitants, an increase of 186% compared to the two weeks before.

The total number of deaths in the country since the beginning of the pandemic is currently 11,308.

Since the start of the pandemic, a total of over 4.8 million tests have been carried out. Of those tests, 65,700 were taken over the past week, with a positivity rate of 25.1%. This means that over a quarter of the people who get tested receive a positive result.

Since 21 October, only people with coronavirus symptoms are being tested. That means that some new infections, which used to be detected, are missing in the statistics, Sciensano said. The public health institute will use statistical models to calculate those infections that are not registered under the new testing strategy, Het Laatste Nieuws reports.

The percentage is an 8.5% increase compared last week, meaning that even though more tests are being carried out – which naturally results in more confirmed infections – the epidemic is still growing.