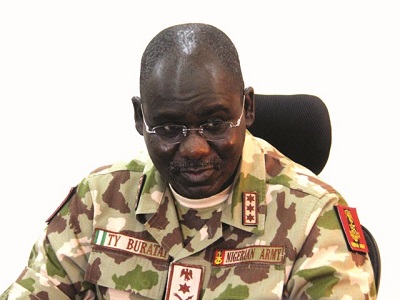 Nigerian Chief of Army Staff, Tukur Buratai lied to Nigerians when he claimed on Monday that he never travelled out of the county until he was already over 50 and a general.

According to a fresh report gathered by a notable online news platform, Buratai travelled to Canada in 2000 for a disarmament, demobilisation and reintegration course at Cornwallis Park, Nova Scotia.

The report which was generated from the Chief of Army Staff’s profile also showed that he was He was also in India and Bangladesh for a national defence course and United Nations programme, amongst others.

Naija News recalls that Buratai in an attempt to downplay the impact of a potential travel ban by United States and United kingdom on Army generals stated he had never stepped out of Nigeria until he turned 50 and a general.

Mr. Buratai had however argued that the military committed crime, saying its actions in Lagos and elsewhere in the country were protected under the Constitution.

He, however, failed to cite the constitutional provision that allowed soldiers to shoot at unarmed citizens carrying out a protest, which Section 40 of the Constitution permits as a civic exercise.

Authorities in Lagos have vowed to hold the Nigerian military accountable for the massacre and since constituted a judicial panel over the attack, which President Muhammadu Buhari has neither publicly acknowledged nor indicated interest to pore over one week on.

Mr. Buratai, now a lieutenant-general and Chief of Army Staff since 2015, also served as a senior assistant to the principal staff officer of late Sani Abacha between 1995 and 1998, during which military sources said he made several trips abroad.