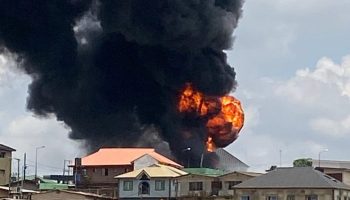 Pandemonium In Ogba As Petrol Station Catches Fire As Another Building Collapses [VIDEO]—A petrol station along Ajayi Road, Ogba in Lagos State has caught fire this Tuesday morning from a yet unidentified source.

According to eye witnesses’ account, emergency responders are already at the scene battling it out.

Also, a building in Isiu Town, in Ikorodu has reportedly collapsed. Members of the Lagos State Emergency Management Agency (LASEMA) are reportedly on their way to the scene as at the time of this publication. A tanker exploded in a gas station about an hour ago at Ogba. pic.twitter.com/xT7ocN5kAP